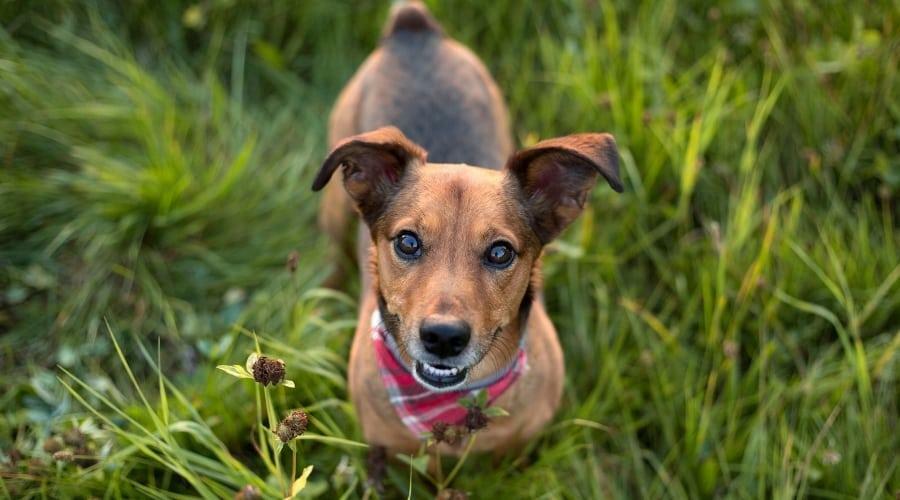 The Jackshund is a mongrel dog, a cross between the Jack Russell Terrier and Dachshund dog breeds. Affectionate, lively and playful, these puppies have inherited some of the best traits from two very different parents. Also known as Jackweenie, the Jackshund is considered a “designer dog,” purposefully bred to bring out the desirable characteristics of each breed. As always, adopt if you want to add one of these dogs to your life. You can find them at shelters and breed-specific rescues. Adopt. Jackshunds are affectionate and energetic with a bit of energy, so be prepared to offer this dog plenty of exercise and cuddles. Their small to medium size makes them adaptable to a multitude of different homes; with enough space, a good deal of their exercise could be done indoors. His energy level, tendency to dig, Olympic-quality jumps and dedication to tracking scent make a fenced yard a great idea. The easiest owner to find would be an active individual or couple with a lot of time and energy to devote to their dog; however, with proper socialization and training, the Jackshund could be a whole family’s best friend. Because of its hunting background, it would be best not to add small animals to the environment, such as birds, rodents or even cats. If you must, be sure to supervise interactions or keep them separate. Jackshunds also have a stubborn streak, but early training will help with this as well. If you are looking for a silly, sweet, fun best friend, this may be the dog for you! AniMall24 recommends a carrier for traveling with your little Jackshund. You should also buy a brush and massager for your short haired pup.

The Jackshund is a mixed breed dog. They are not pure breeds like their parents Jack Russell Terrier or Dachshund.Jackshund coat colours include white, black, brown and cream. Jackshund coat colours include white, black and cream. Longer coats need to be brushed and trimmed more often than shorter coats. Even the shorter coat of the Jackshund should be brushed a couple of times a week. Jackshunds are very energetic and need plenty of exercise. They should get between 45 and 90 minutes of exercise daily, which can be a mixture of activities as well as indoor games. Jackshunds can be great with children, provided they are socialised at an early age. As with all dogs, it is a good idea to supervise interaction with young children.Jackshunds can get along well with other pets, but if early socialisation is not possible, it may be best to remain a one-pet household. Also, it is best not to encourage interactions between small animals, such as rodents, and Jackshunds, as it may be difficult to suppress their hunting instincts.Jackshunds can be stubborn when it comes to training, and may jump high. Having higher fences around your yard will help, but even then, you should watch to make sure the fence is higher than your Jackshund’s jump.

The exact history of the Jackshund is a mystery, but the intentional mixing of breeds to create “designer dogs” has been popular around the world since at least the 1980s. The idea is usually to accentuate the most desirable traits of each breed and to minimise health problems, such as the back problems that dachshunds often have, due to their elongated spine.As for the Jackshund’s progenitors, the Jack Russell Terrier emerged in the early 19th century, an expert blend of the Terrier’s natural hunting and tracking abilities and the agility afforded by the Jack Russell’s small size. Dachshunds are an older breed, originating in Germany in the 15th century, bred for their fearless nature and long bodies to hunt in badger dens. They became companion dogs around the 19th century. Designer dogs’, with these intentional mixes, are still in high demand, which means they can also be adopted from shelters, as not everyone who takes home a Jackshund – or any dog – ends up keeping them, unfortunately. If you want a Jackshund to be part of your life, opt for adoption.