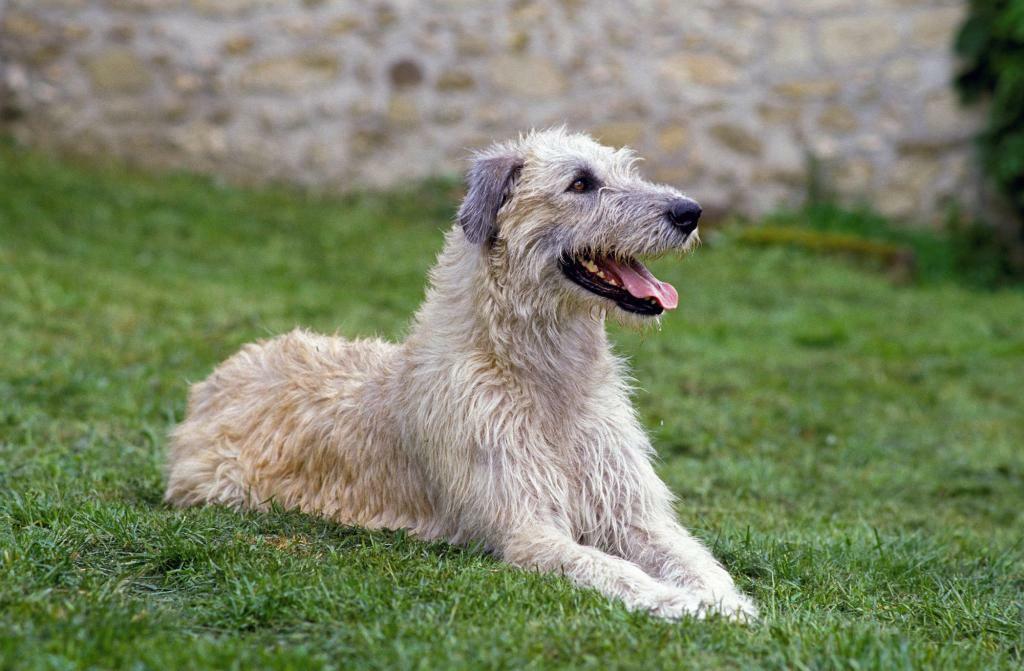 The Irish Wolfhound breed of dog was originally used in warfare to drag men off horses and chariots. They also hunted big game such as deer, wild boar and wolves. Today, this adaptable dog is a family companion that also competes in obedience, tracking and lure coursing, although they are purebred dogs, some may end up in the care of shelters or rescues. The Irish Wolfhound is, on average, the tallest breed of dog in the world, although other breeds may surpass it. For this reason, flat dwellers will find it very difficult to provide enough space for these dogs to move and thrive. But for families with plenty of room to move around, Irish Wolfhounds are very affectionate companions, even with children. Just make sure you have a fence – and a high one – to keep your dog from chasing wildlife.AniMall24 recommends a large, spacious cage so your big Irish Wolfhound has a place to rest and relax. You should also buy a dog brush and massager for your long-haired puppy.

Irish Wolfhounds are not recommended for flat living. Although they have relatively low activity levels indoors, they need space to stretch out and are not built to negotiate stairs.Irish Wolfhounds require at least 40 minutes of exercise daily and do best in a home with a large fenced yard.Irish Wolfhounds need a fenced yard to prevent them from chasing prey away from their yards. They should not be kept in a yard with underground electronic fences. The desire to chase is too strong to be overcome by the threat of a momentary shock. The Irish Wolfhound is a friendly dog that tends to get along well with everyone. With early socialisation and training, he will be gentle with other dogs and tolerant of indoor cats. If you are looking for a long-lived breed, the Irish Wolfhound is not for you. If you are looking for a long-lived breed, it is not for you, as it lives 6 to 8 years and its large size predisposes it to many health problems. The Irish Wolfhound is not a pony and should not be ridden by children, however young they may be. Its joints are not built for the effort. Nor is it made to pull a cart or other vehicle.Irish Wolfhounds thrive when they are with their owners. They are not outdoor dogs, although they enjoy playing outside.To get a healthy dog, never buy a puppy from an irresponsible breeder, puppy mill or pet shop. Look for a reputable breeder who tests their breeding dogs to make sure they are free of genetic diseases that can be passed on to puppies and that they have a sound temperament.

Throughout history, the Great Hound of Ireland has been a wonder wherever it has gone. The Roman Consul Aurelius wrote in 391 AD that “all Rome looked with awe” at the seven Irish hounds that had been sent to him as a gift. The dog’s large size made it fearsome in battle and capable of chasing the Irish elk, which stood two metres at the shoulder – twice the height of the Wolfhound – as well as the wolf, the predator from which the Wolfhound eventually took its name.before that, it was known simply as Cu, a Gaelic word that probably meant hound, wolfhound or war dog. This large dog has been mentioned in Irish literature over the centuries and was used as a war dog to pull men off horses or wagons. It was also used to hunt moose, wild boar and wolves, as well as to guard houses and livestock. Irish law only allowed kings and nobles to own an Irish wolfhound, and the number of dogs owned was related to the prestige of the title held. For example, members of the lesser nobility were limited to two Wolfhounds. Irish legends tell that the folk hero Finn MacCumhaill owned five hundred Irish Wolfhounds, his two favourites being Bran and Sceolan, who were of magical birth.The Irish Wolfhound was a popular gift among rulers and other important people. They often arrived with chains and necklaces made of silver and gold. One of the favourite stories is of the Irish Wolfhound that King John of England sent to the Prince of Wales, Llewellyn, in 1210. One day Llewellyn went hunting and commissioned Gelert to look after his son while he was away. When he returned, he found the baby’s cradle overturned and Gelert covered in blood. Mad with grief, he killed Gelert, but as the faithful dog lay dying, Llewellyn heard his son crying. He searched further and found the boy, alive, next to the body of a wolf that Gelert had killed. Llewellyn mourned his dog forever and erected a grave in Gelert’s honour, which can still be seen in Caernarvon, Wales.Despite their fame, the number of Irish Wolfhounds declined over the years, especially after the moose and wolf in Ireland were hunted to extinction. The Irish Wolfhound was kept by a few families as an ornamental dog and was rarely used in the field, and the breed might have disappeared had it not caught the interest of Major H. D. Richardson. In the mid-19th century, Richardson wrote a book suggesting that the Irish Wolfhound and the Highland Deerhound were the same breed. He began breeding Irish Wolfhounds, basing his breeding programme on Glengarry Deerhounds. Another advocate of the Irish Wolfhound was a Captain George Augustus Graham, who used Glengarry Deerhounds, Borzoi, and a Tibetan Mastiff to revitalise the Irish Wolfhound breed. He also used Irish Wolfhounds crossed with Great Danes, including a Harlequin Great Dane. Graham founded the Irish Wolfhound Club in 1885 and the Kennel Club of England recognised the breed in 1925. The first Irish Wolfhound registered with the American Kennel Club was Ailbe in 1897, and the Irish Wolfhound Club of America was founded in 1927. Today, the Irish Wolfhound is ranked 77th out of 155 breeds and varieties recognised by the AKC.