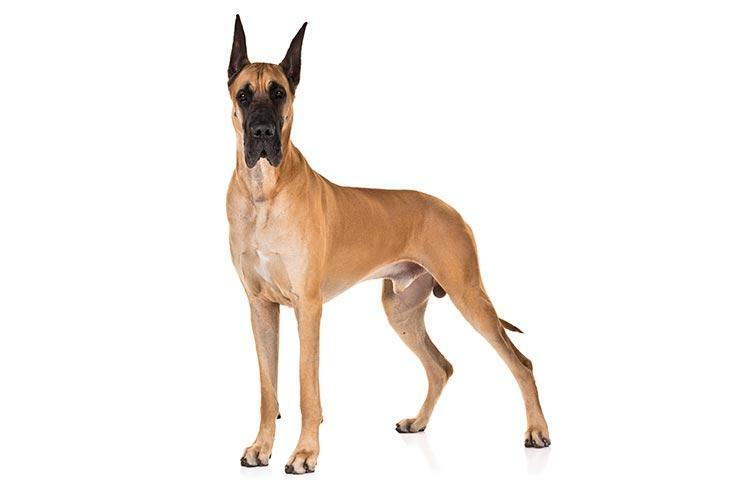 Oh, sweetheart! The Great Dane is a truly great and noble breed of dog, often referred to as a gentle giant or the “Apollo of dogs. Apollo is the Greek god of the sun, the brightest element in the sky.Great Danes have been around for a long time, and depictions of Danish-like dogs on artefacts date back thousands of years. Although they are a pure breed of dog, you can find them in shelters and rescues, so remember to adopt. Don’t shop around if you decide this is the dog for you.Great Danes certainly have a large stature in the dog world; but while they may look terribly imposing, they are actually one of the best-tempered dogs around. Despite their size, the Great Dane is a sweet and affectionate pet. AniMall24 recommends a large, spacious cage to give your Great Dane a place to rest and relax. You should also buy a dog brush and massager for your short-haired puppy.

The Great Dane is sweet, eager to please, people-oriented, easy to housebreak, and responds well to training using positive reinforcement.like many giant dogs, Great Danes are short-lived.Great Danes require a lot of space. Although they make excellent house dogs, they need a lot of space just to move around. There are few things they can’t reach – kitchen countertops and dinner tables are no problem – and their tails can easily sweep your coffee table.Everything costs more when you have a large dog – collars, veterinary care, heartworm preventative, and food. In addition, you’ll need a crate and vehicle large enough to house your Great Dane without crumpling. It takes time for the bones and joints of large dogs, such as Great Danes, to stop growing and stabilise. Do not allow your Great Dane puppy to jump and do not take him for a run until he is at least 18 months old; this will reduce stress on the growing bones and joints.The special dietary requirements of giant breed Danes must be followed or orthopaedic problems may arise.Great Danes are not particularly suitable for flats or small houses, simply because they are so large. Fortunately, they are not jumpers, so a two-metre fence should contain them.Never buy a puppy from an irresponsible breeder, puppy mill or pet shop. Seek out local shelters and rescues if you decide this is the breed for you.

Drawings of Great Dane-like dogs have been found on Egyptian artefacts dating back to 3000 BC and on Babylonian temples built around 2000 BC. There is evidence that similar dogs originated in Tibet, with written accounts of such dogs appearing in Chinese literature as early as 1121 BC. The breed is believed to have been taken to various parts of the world by the Assyrians, who traded their dogs with the Greeks and Romans. The Greeks and Romans bred these dogs with other breeds. The ancestors of the English Mastiff were probably involved in the development of the breed, and some believe that the Irish Wolfhound or Irish Greyhound may also have played a role. Their ears were cropped to prevent the tusks of wild boar from tearing them off. In the 16th century, the name of the breed was changed to the “English Mastiffs”, but by the end of the 17th century many German nobles began to keep the larger, more handsome dogs, which they called Kammerhunde (chamber dogs), in their homes. These dogs were pampered and wore golden collars lined with velvet. The name Great Dane came about in the 18th century, when a French naturalist travelled to Denmark and saw a slimmer, greyhound-like version of the Boar Hound. He called this dog Grand Danois, which eventually became Great Dane, and the more massive specimens of the breed were called Danish Mastiffs. Most breed historians credit the German breeders with perfecting the breed into the elegant and balanced dog we love today. In 1880, breeders and judges met in Berlin and agreed that since the dogs they were breeding were distinctly different from the English Mastiff, they would give it its own name: Deutsche Dogge. However, the Italians and the English-speaking countries did not accept this name. Even today, the Italians call the breed Alano, which means Mastiff; and in English-speaking countries, of course, they are called Great Danes. Throughout the late 19th century, wealthy German breeders continued to refine the breed. They focused on the temperament of the dog, as Great Danes had an aggressive and fierce temperament due to the fact that they were originally bred to hunt wild boar, a particularly ferocious beast. We do not know when the first Great Danes arrived in the United States, or even where they came from, but the Great Dane Club of America was formed in 1889. It was the fourth breed club allowed to join the American Kennel Club.