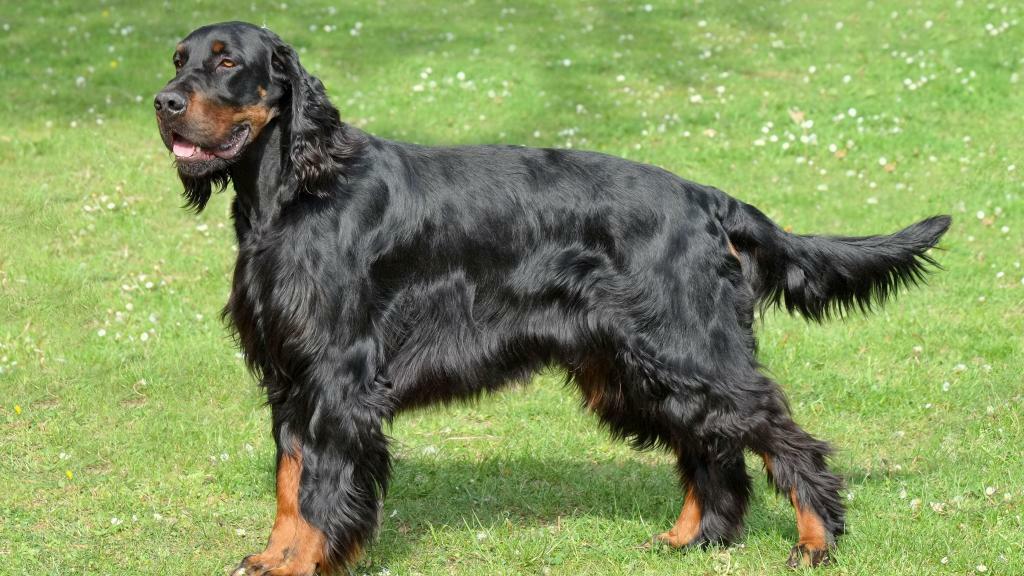 Originally bred to hunt pheasant and quail, Gordon Setters remain good hunting companions and field trial competitors. Dogs of this breed also compete in obedience, conformation and agility, and make excellent family companion dogs. These dogs need plenty of exercise to burn off their high energy. If you can provide the space to play and keep up with daily walks, then this may be the breed for you.AniMall24 recommends a dog bed to give a good night’s sleep to your medium sized Gordon Setter. You should also pick up a de-shedder dog for your high shedding puppy!

The adult Gordon Setter needs one to two hours of exercise daily. This can be a game of fetch in a field or backyard, a run, or a couple of long walks. Gordon Setters do well with children and can be protective of the children in their family. Overall, they are wonderful and loving companions for children and the whole family. It is important to remember that dogs and small children should never be left unsupervised, regardless of breed. Being an intelligent and hard-working breed, the Gordon Setter can become destructive if its needs for exercise and mental stimulation are not met. Boredom and extra energy are not a good mix, and the best way to avoid any destructiveness is through proper exercise and training.Gordon Setters are not backyard dogs. They are much happier when they are with their families and should not live away from them. They enjoy personal attention and family activities.Gordon Setters are often unruly when young, but tend to become gentle and calm as they grow older.Strong temperaments are well known in the breed and many owners have the feeling that they are “owned” and not owned. Gordon Setters are independent and determined, qualities which may translate into stubbornness for some.Gordon Setters are excellent watchdogs and are wary of strangers. Barking is not uncommon in this breed, and Gordon Setters will bark to express likes, dislikes and other emotions, even if they feel you should have taken them with you when you left.Gordon Setters can suffer from separation anxiety and can become destructive when they do.Gordon Setters shed, and their coat requires more than minimal grooming. If you don’t have the time to groom them properly, this may not be the breed for you.Although many Gordon Setters get along well with other animals, some can be aggressive with other dogs. Socialisation is important for all dogs and should be initiated as much as possible. Gordon Setters are not recommended for flat living. Although they are generally quiet indoors, they need a large fenced yard for exercise. Although Gordon Setters are known for their stubbornness, they can be sensitive and are easily cowed by abuse and neglect. Never treat your dog harshly, but give him firm, fair and consistent training, without using anger or physical force. If Gordon Setters are not trained, they can become destructive, willful and dominant. To get a healthy dog, never buy a puppy from a backyard breeder, puppy mill or pet shop. Look for a reputable breeder who tests their breeding dogs to make sure they are free of genetic diseases that can be passed on to puppies and that they have sound temperaments.

Black and tan pointers were known in Scotland as early as 1620, but it was their presence in the kennels of the 4th Duke of Gordon 200 years later that made them stand out. Castle Gordon Setters had first class hunting skills and were also beautiful. It was written about them: “They are not fast dogs, but they have a good staying power and can hold their ground from morning till night. Their noses are first class and they rarely make a false point. Early Gordons also came in black and white, tri-colour and red, but it is said that the Duke preferred black and tan dogs, and that is what has prevailed over the years. When the Duke died in 1827, his heir, the Duke of Richmond, continued his kennel. Between 1859 and 1874, the Kennel Club of England listed 126 black and tan setters in its stud book. In June 1859, at the first official dog show, a black and tan setter named Dandie took the first prize for setters, whose pedigree dated back to the Duke of Gordon’s kennels. The breed officially took the name Gordon Setter in 1924, and the first Gordon Setters imported into the United States came from the Gordon Castle kennel. The dogs, Rake and Rachel, were acquired by Daniel Webster and George Blunt in 1842. The American Kennel Club recognised the Gordon Setter in 1892, and in 1924 the Gordon Setter Club of America, Inc. was formed. The club is still in existence today and has over 1,000 members. Today, the Gordon Setter is ranked 88th out of 155 breeds and varieties registered by the AKC.