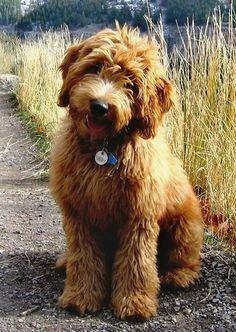 Designer dogs, also called hybrids, are not true breeds: they are crosses of two specific breeds. If you are interested in a Goldendoodle puppy, understand that its appearance, size and temperament are not as predictable as those of pure breeds, as it is not known what characteristics of each breed will appear in a given dog.The Goldendoodle is the result of crosses of Poodle with Golden Retriever. The Goldendoodle is considered a dog with no coat, but requires regular grooming and trimming. If the coat is kept short, it should be trimmed every six to eight weeks and brushed every few weeks. If the coat is kept in its natural state, it should be brushed once every one to two weeks.The Goldendoodle is not a watchdog, and is generally not known to be noisy. The Goldendoodle is not a watchdog, and is generally not known to be noisy, so it may not bark even if someone knocks on the door. The Goldendoodle requires 20 to 30 minutes of daily exercise and is a wonderful family companion, so it generally gets along well with children and gets along well with other dogs and family pets. The Goldendoodle is a very sociable dog that should not live away from its family. It is not suited to living in a kennel or outdoors; it wants to be in the house.The Goldendoodle can suffer from separation anxiety if left for long periods of time.The Goldendoodle can be an excellent companion for people with allergies.To get a healthy dog, never buy a puppy from an irresponsible breeder, puppy mill or pet shop. Look for a reputable breeder who tests their breeding dogs to make sure they are free of genetic diseases that can be passed on to puppies and that they have a sound temperament.