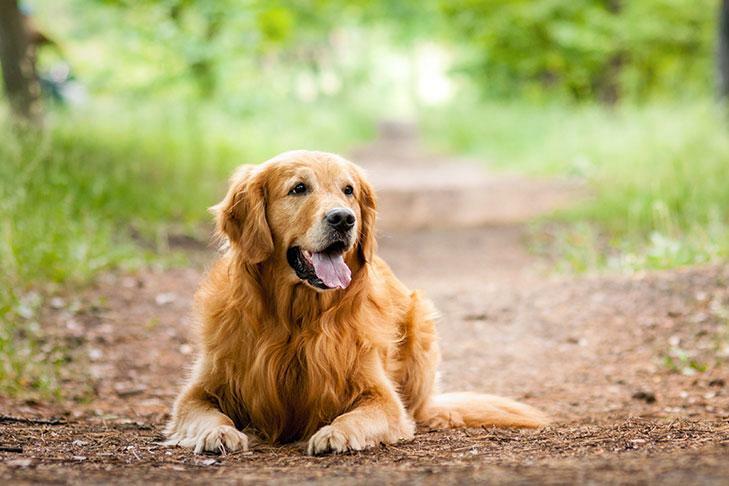 Golden Retrievers shed a lot of hair, especially in spring and autumn. Daily brushing will remove some of the loose hair from the coat, preventing it from being deposited on your clothes and around the house. But if you live with a Golden, you will have to get used to the dog’s hair.Golden Retrievers are family dogs; they need to live indoors with their human “pack”, and should not spend hours alone in the backyard.Golden Retrievers are active dogs who need 40 to 60 minutes of hard exercise a day. They benefit from obedience training, agility classes and other canine activities, which are a good way to give your dog physical and mental exercise.Although gentle and trusting with children, Golden Retrievers are large, rambunctious dogs that can accidentally knock over a small child.Goldens love to eat, and will quickly become overweight if overfed. Limit treats, measure your dog’s daily kibble, and feed him regular meals rather than leaving food out all the time.Because the Golden Retriever is so popular, there are many people breeding Goldens who care more about making money from the demand for puppies than raising happy, healthy dogs. To get a healthy dog, never buy a puppy from an irresponsible breeder, puppy mill or pet shop. Look for a reputable breeder who tests their breeding dogs to make sure they are free of genetic diseases that can be passed on to puppies and that they have sound temperaments.

For many years there was a legend that Golden Retrievers were descended from Russian shepherd dogs bought from a circus. In reality, the breed was developed in Scotland, on the estate of Sir Dudley Majoribanks, later known as Lord Tweedmouth. Tweedmouth’s breeding records between 1835 and 1890 show what he intended with the Golden: A talented retriever – Tweedmouth was an ardent waterfowl hunter – with a superb nose, who was more attentive to his human hunting companion than the setters and spaniels used at the time to retrieve. Tweedmouth took Nous to Scotland and, in 1868 and 1871, crossed him with Belle, a Tweed Water Spaniel. Tweed Water Spaniels (now extinct) were known to be avid retrievers in the hunting field, and exceptionally calm and loyal in the home – characteristics found in today’s Golden Retrievers.Nousand Belle’s descendants were bred with Wavy- and Flat-coated retrievers, another Tweed Water Spaniel, and a red setter. Tweedmouth kept mostly yellow puppies to continue his breeding programme, and gave others to friends and relatives, and it is not surprising that the Tweedmouth breed first attracted attention for its hunting abilities. One of the best known was Don de Gerwyn, a descendant of one of the liver-haired Tweedmouths, who won the International Gundog League trial in 1904.The Kennel Club of England officially recognised the Golden Retriever as a distinct breed in 1911. At that time, they were classified as “Retriever – Yellow or Golden”. In 1920, the breed name was officially changed to Golden Retriever and the American Kennel Club recognised the breed in 1932. Today, the Golden Retriever is the second most popular breed in the United States.