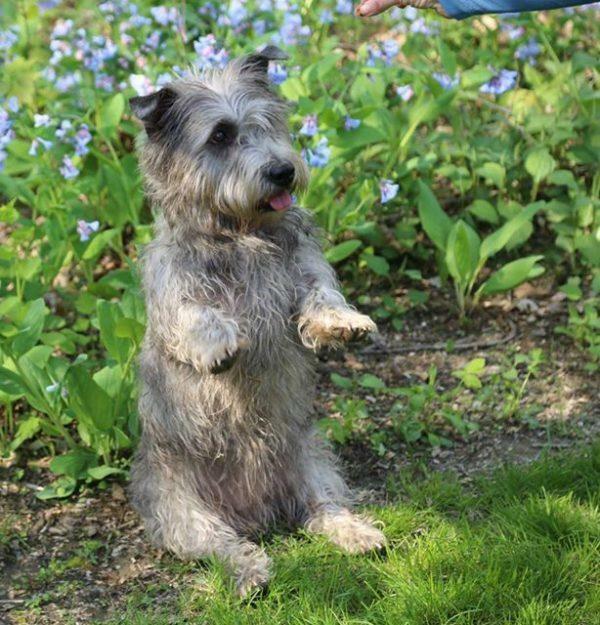 The Glen of Imaal Terrier is a strong, independent breed of dog named after the remote valley in Ireland where it originated. Bred to hunt foxes and badgers, and to keep homes free of rodents, the Glen is a skilled and cunning hunter. They are also a loving family dog, gentle and affectionate with their people, although they are purebred dogs, some may end up in the care of shelters or rescues. Although they are purebred dogs, some may end up in shelters or rescues. Consider adoption if this is your breed. Because of their small game history, Glen of Imaal Terriers retain a love of digging. You can create a designated outdoor digging area for your dog to let off steam. Start training and socialising your puppy from an early age, and you’ll be rewarded with a loving, lifelong companion.AniMall24 recommends a carrier for travelling with your little Glen of Imaal Terrier. You should also buy a dog water bottle for any outdoor adventures you have with your pup.

The Glen needs daily exercise. Dog sports, such as agility, are a good way to burn off energy, but a brisk 30-minute walk around the neighbourhood will also do the trick. If you want to save your flowerbeds, it is advisable to train your Glen to use a designated digging area in the yard.Glens enjoy playing and roughhousing and can be wonderful companions for children, although they are strong and rambunctious enough to hit small children or youngsters.Although they are not known to be barkers, the Glen will bark a lot if accidentally encouraged. Do not run up to a barking Glen to see what the fuss is about: it will teach him that if he makes a fuss, he will get your attention. The Glen can be aggressive towards other dogs and needs a lot of time with other canines to learn to get along with them, ideally from puppyhood. Puppy kindergarten classes, where puppies are given time to play with each other, in addition to obedience training, are an excellent way to help your dog hone his canine social skills.His strong prey drive means that the Glen is not suited to homes with other small pets that he may consider prey, such as cats, rabbits and hamsters. It also means you’ll need to teach him good leash manners, so he won’t drag you halfway around the block when he sees something he wants to chase.The Glen was bred to be a hunter of small animals and has a strong innate chase drive. If you have a yard, you will want a sturdy fence to keep your Glen from going out and chasing anything that comes by that looks like prey.To get a healthy dog, never buy a puppy from an irresponsible breeder, puppy mill or pet shop. Look for a reputable breeder who tests their breeding dogs to make sure they have no genetic diseases that can be passed on to the puppies and that they have a sound temperament.

The Glen of Imaal Terrier hails from Ireland and takes its name from the remote valley in County Wicklow where it originated. Glen fanciers believe the breed is descended from dogs brought over by settlers – who were granted land in the valley in exchange for serving in Queen Elizabeth I’s army – who interbred with the local canines, the breed developed as an all-purpose hunter, and was used to hunt foxes and badgers and rid the home of rodents. Because of its tenacious spirit, it was also used in organised dog fights. One of his most interesting jobs was that of a rotisserie dog, in which the dog worked on a treadmill-like contraption that powered the rotation of a kitchen spit. The Glen was recognised by the Irish Kennel Club in 1933, being one of the last Irish terriers to gain official recognition in Ireland. The Glen had to wait 42 years before the British Kennel Club recognised the breed in 1975, and another 12 years before the American Kennel Club did the same, in 1987.The breed is still rare today, although the Glen is gaining in popularity every year. It is proving to be an excellent family dog and, for some owners, continues to play its traditional role as a skilful hunting companion.