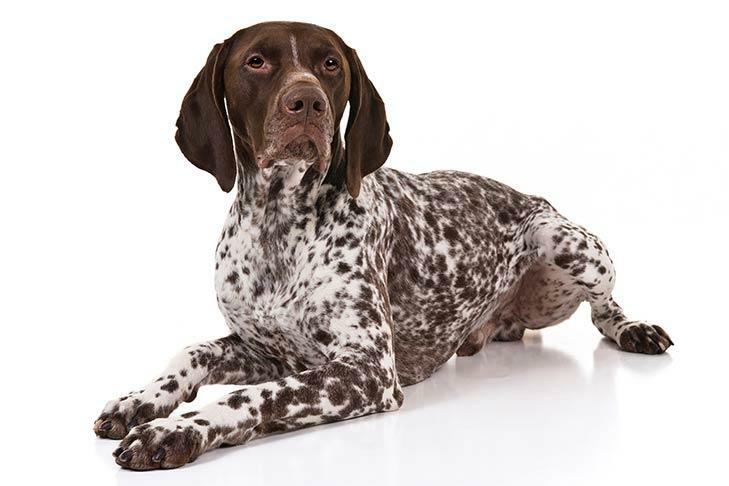 The versatile German Shorthaired Pointer sporting dog breed hunts many types of animals, retrieves on land or in the water and is an affectionate companion. They have a striking coat and are easy to care for, but need plenty of vigorous exercise – if you can provide this dog with the mental and physical challenges it craves, it will be your best four-legged friend. But those who live in flats or spend a lot of time outdoors should be careful. Without space to play and plenty of exercise, you may find a bored dog engaging in destructive behaviour when you get home.AniMall24 recommends a dog bed to give your medium German Shorthaired Pointer a good night’s sleep. You should also pick up a dog toy to help burn off your puppy’s high energy.

German Shorthaired Pointers are very energetic dogs. At least one hour of intense exercise, preferably off leash, every day is recommended. Without sufficient exercise, your GSP can become nervous and destructive. GSPs are people-oriented and do not like to be left alone for long periods of time without something to keep them occupied. Because they are so intelligent, they will find something to keep them busy if you don’t, usually by getting into something you don’t want them to get into.Bored German Shorthaired Pointers can become escape artists, so you need at least a two-metre high fence if you plan to leave them alone outside.GSPs bark at strangers and noises. Female GSPs are usually very protective of their puppies if they have a litter.To get a healthy dog, never buy a puppy from an irresponsible breeder, puppy mill or pet shop. Look for a reputable breeder who tests their breeding dogs to make sure they are free of genetic diseases that can be passed on to the puppies, and that they have a sound temperament.

The earliest versions of this type of dog date back to the 17th century, but the German Shorthaired Pointers as we know them today were created to be multi-purpose hunting dogs in the mid to late 19th century. The forerunner of the GSP, the German pointer or German hunting dog, was the product of crosses between Spanish pointers and hounds, resulting in a large hound-like dog with a sharp nose. Hunters selected dogs with docile personalities, but came to want style and elegance to go with that obedient nature and powerful scenting ability. It was Prince Albrecht zu Solms-Braunfeld of the Royal House of Hanover who encouraged breeders to select the first dogs on the basis of form. The result was a lean, athletic and responsive hunting dog, which is also an intelligent and affectionate companion dog. The first known German Shorthair in the United States was imported in 1925 by Dr. Charles Thornton of Montana, who began breeding the dogs. Only five years later, the breed was recognised by the American Kennel Club. The first German Shorthair registered with the AKC was Greif v.d. Fliegerhalde. World War II affected the breeding of German Shorthaired Pointers. As the end of the war approached, many breeders hid their gold, their diamonds, their works of art, their Lipizzaner sires and their German Shorthaired Pointers. The best dogs were sent to Yugoslavia for safekeeping. But as Yugoslavia was behind the Iron Curtain after World War II, West German breeders had no access to Germany’s best German Shorthairs and were forced to rebuild their beloved breed from a limited gene pool. The 1950s was a time of significant advances for the GSP in the United States, but many believe that 1968 was the zenith of the German Shorthaired Pointer in the United States. That was the year when three of the top four finishers in the AKC National Field Trial Championships already had their conformation championships.In addition to their hunting abilities, GSPs have inspired modern writers to immortalise the breed in their works. One such writer is Robert B. Parker, whose popular mystery series is about a Boston detective named Spenser. Throughout the series, Spenser has three German Shorthaired Pointers, all named Pearl. Parker often appears on the dust jackets of his Spenser books with a solid liver GSP.Rick Bass wrote a book titled Colter: The True Story of the Best Dog I Ever Had about living and hunting with a German Shorthaired Pointer in Montana. Writer Mel Wallis wrote a book titled Run, Rainey, Run about his relationship with his intelligent and versatile German Shorthaired Pointer for hunting.Today, the German Shorthaired Pointer ranks 19th out of 155 breeds and varieties recognised by the AKC.