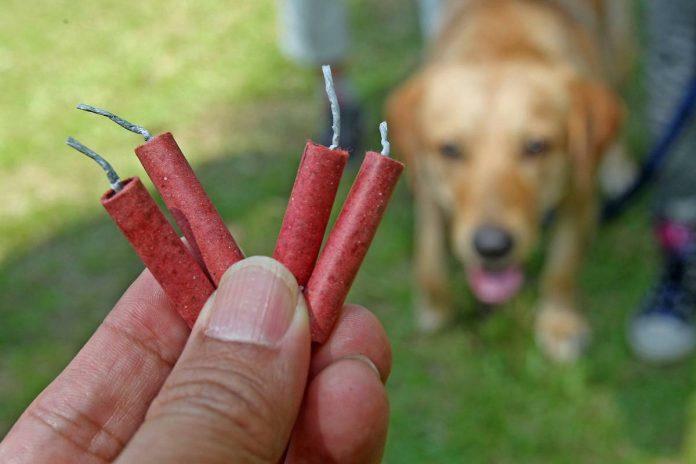 Fireworks ban on New Year’s Eve: How useful is it for our animals?

Many pet owners await New Year’s Eve with horror. After all, the fireworks at the turn of the year scare many pets. This year, the sale of fireworks was again banned due to the corona pandemic. Does that mean a carefree turn of the year?

So that the already heavily burdened hospitals and medical practices do not have to care for fireworks injuries in the fourth wave of corona, the sale of fireworks to private individuals in Germany is also prohibited on New Year’s Eve 2021 . The old federal government announced the measures at the beginning of December, and the Federal Council confirmed them on Friday.

Good news for animal rights activists – after all, every year the firecrackers ensure that countless pets and wild animals suffer from panic attacks and that hundreds of dogs and cats run away . Nevertheless, the corona-related fireworks ban is controversial: Many Germans are reluctant to do without a beloved New Year’s Eve ritual.

Sarah Ross from the animal welfare organization “Vier Pfoten” knows that people enjoy fireworks. “Lots of people have a lot of fun igniting rockets and firecrackers,” she says in the DeineTierwelt podcast “Pet Talks: Klartext”. “I can understand the approach, but from an animal welfare point of view, this is not an argument in favor of setting off fireworks.”

Then the suffering that the blasts cause in pets, wild animals and farm animals is immeasurable. Dogs and cats panic, run away in fear, and injure themselves. Especially with dogs, however, it also happens again and again that they get tremors because of fear. You can see what it looks like in a video from the “BBC” – Charlie, a ten-year-old greyhound from animal welfare, lies trembling on the kitchen floor and can no longer be calmed down:

Just like Charlie, countless other dogs feel the same way every year – 63 percent of pet owners said in a survey by the “Tasso” pet register that their pet had panic on New Year’s Eve. 6,148 people took part in the survey.

By the way, the animals are also afraid if they have already seen New Year’s Eve several times. Because the fireworks always come unexpectedly for the four-legged friends. “Animals don’t understand that another year has passed and that’s why it’s New Year’s Eve. For them, the fireworks noises and the flashes of light come out of nowhere, ”says animal rights activist Ross. In addition: “It is the case with many animals that once they develop fear, the fear becomes worse rather than better over the years.”

Because of the ban on fireworks: Fewer animals escaped on New Year’s Eve 2020

But is a firework ban the solution to protect our animals on New Year’s Eve? “Yes!” Says Ross. “Vier Pfoten”, together with nature conservationists and doctors and police representatives, calls for a ban on fireworks in Germany – regardless of Corona. For Ross this is the only really sensible method to spare our four-legged friends the New Year’s agony.

And the statistics prove her right. While the “Tasso” home register before Corona received around 1,000 reports of missing animals every year on New Year’s Eve, this number halved at the turn of the year 2020/2021 . Even then, the federal government had banned the sale of firecrackers. That is why animal rights activists also welcome the fact that there will be no rockets and firecrackers on supermarket shelves in 2021 due to Corona.

“We are pleased about the ban on the sale of rockets and firecrackers, because there will be significantly fewer fireworks and thus not only less pollution for people, but also for animals,” says “Four Paws” pet animal expert Daniela Schneider . Nevertheless, pet owners cannot expect a firecracker-free and therefore safe turn of the year 2021/22.

Just because the sale of pyrotechnics is banned doesn’t mean that New Year’s Eve won’t be banged this year. The only thing that is prohibited is sales. The federal government only advises against igniting the crackers. In plain language: If you still have firecrackers from 2019 in the basement or stock up abroad, you can also fire them – unless the municipality forbids this.

Sarah Ross therefore advises caution. If you want to be absolutely sure, you shouldn’t go out with your dog in the dark around December 31st, and on New Year’s Eve you should lock windows and doors well and lower the shutters. An inside room can be made into a retreat for anxious dogs and cats – soft music also distracts from the explosions.

But not only the apartment has to be safe – we two-legged friends also have to give our animals security. “Being with the animal, laying on your hand – but just don’t increase the animal’s fear,” recommends Ross. Because if we gave our animals to understand that the situation was really bad at the moment, then that would only increase the panic.

By the way: Even without fireworks, there are rituals and traditions with which we can celebrate New Year’s Eve appropriately without animals having to suffer. In many Asian countries, for example, there are light shows with drones – without any blasts:

For Ross, New Year’s Eve is actually much more than just fireworks: “Watching lead pouring, raclette, ‘Dinner For One’, being with friends and counting or toasting the New Year,” she lists. “I hope that our society will develop in the direction that we can take care of the health of other people and animals.”

More on this in the podcast

Would you like to find out more about the topic? In the new episode of the DeineTierwelt podcast “Pet-Talks: Klartext”, Sarah Ross explains what effects fireworks have on wild animals and how you can now prepare for a stress-free New Year’s Eve with your four-legged friend. Listen in now:

Read More »
PrevPreviousExclusive Survey: These Are the Greatest Benefits of Pets
NextWhy do many older people want to adopt animals?Next