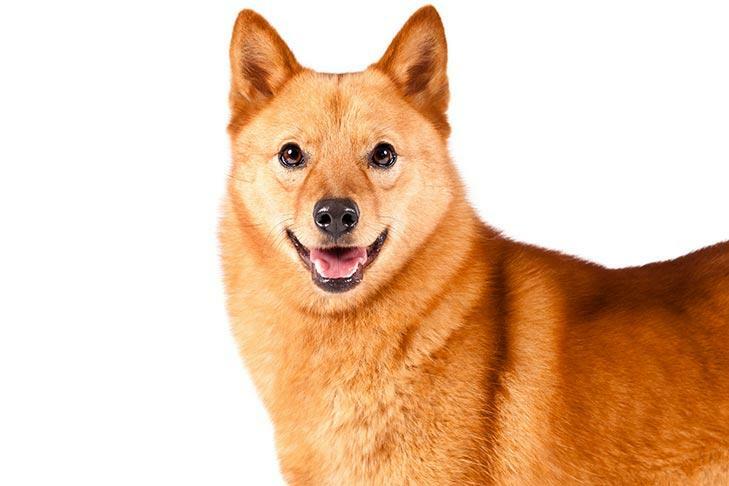 Finnish Spitz were originally were bred to hunt a variety of small and large game, and then bark when they found something. Today they’re considered “talkative” companions who will keep you apprised of just about everything going on in your surroundings.Even though these are purebred dogs, you may find them in the care of shelters or rescue groups. Remember to adopt! Don’t shop if you want to bring a dog home.These dogs are very loving and playful, but they do require firm, consistent training. That may prove difficult with their independent streak, and they’ll need a securely fenced yard because they love to bark at people and animals who walk past — and sometimes even chase them. If you can meet the breed’s needs, you’ll have an affectionate, playful companion who still acts like a puppy well into adulthood.

Finnish Spitzes are lively, energetic dogs that require a lot of daily exercise. They love to bark. If Finnish Spitzes are hunting dogs, they should never go outside unattended. If left alone outdoors for too long, Finnish Spitzes will bark at everything in sight, unless trained at an early age not to do so.Finnish Spitzes take a long time to mature mentally, and can be rather dumb and puppyish until three or four years of age.Hunting dogs in general can be independent thinkers, which makes them appear stubborn at times. Finnish Spitzes are no different. However, if you learn the proper training methods and motivations, you will be pleased with your dog’s intelligence and willingness to learn.Finnish Spitzes are usually good with other household pets, but can be aggressive with unfamiliar dogs.This is a breed that tends to be aloof and distrustful of strangers. They are not good watchdogs, but will alert you by barking if someone approaches your home.Finnish Spitzes love to eat, especially treats. As they can be somewhat manipulative, they will try to get as many treats as possible and can become overweight. Never buy a Finnish Spitz from a puppy mill, pet shop or breeder that does not offer health certificates or guarantees. Look for a reputable breeder who tests their breeding dogs to ensure that they are free of genetic diseases that can be passed on to puppies and breeds for a healthy temperament.

The origin of the Finnish Spitz is not documented, but dogs of the same type have been used for hunting of all kinds in Finland for hundreds of years. It is believed that Spitz-type dogs were brought from central Russia by the tribes of Finno-Ugric peoples who migrated to Finland a couple of thousand years ago. They were mainly used as hunting dogs. Being so isolated, the Finnish Spitz breed developed with little influence from other breeds. People started to come to the lands where the Finnish Spitz lived, bringing their own dogs and mating them with the Finnish Spitz. So much interbreeding took place that by 1880 the Finnish Spitz was on the verge of extinction. Then something wonderful happened. Two men from Helsinki, named Hugo Sandberg and Hugo Roos, were on a hunting trip in the northern forests and saw some Finnish Spitz hunting. They realised the importance of these dogs and set out to save the breed. Hugo Sandberg wrote an article for an 1890 edition of Sporten magazine about the dogs he had seen. His description was so complete and so carefully written that in 1892, when the Finnish Kennel Club recognised the breed, the first breed standard was based on his article. Sandberg was a judge at the first dog show in Helsinki in 1891. The breed was given the name Finnish Spitz in 1897.Hugo Roos played his part in the preservation of the breed by actively breeding the Finnish Spitz for 30 years. He was also an exhibitor and judge for even longer. In 1920, Sir Edward Chichester of England was so enchanted with the breed during a hunting trip to Finland that he took a pair of dogs back to England. A few years later, Lady Kitty Ritson of Tulchan Kennels also saw the breed in Finland and fell in love with it. Together with other fanciers, she organised the Finnish Spitz Club in England, which was first registered with the Kennel Club of England in 1934. She also imported many dogs and was the first to give them the affectionate nickname Finkie.World War II was a difficult time for the breed, as it was for many others. After the war, the quality of the dogs on show was very poor. Two dogs imported to England from Finland, Mountjay Peter, and Kiho Seivi, and one imported from Sweden, Friedstahills Saila, improved the breed dramatically in England. In 1959, two puppies were born while in quarantine in England. They were named Tophunter Tommi and Tophunter Turre. These two dogs appeared in almost every pedigree of the best winning Finnish Spitz in England until the early 1970’s. In recent years, a bitch called Irheilu Penan Pipsa de Toveri has had the greatest influence on the breed in England. She appears in the pedigree of almost all the best Finnish Spitzes in England and is the all-time best breeding bitch of the breed in that country.Finnish Spitzes were first imported to the United States from England in 1959 by Cullabine Rudolph. In the 1960s, Henry Davidson of Minnesota and Alex Hassel of Connecticut began breeding imported Finnish Spitzes. The Finnish Spitz Club of America was formed in 1975 and the American breed standard, based on the Finnish standard, was developed in 1976. The AKC allowed Finnish Spitzes to be shown in the Miscellaneous Class in April 1984. In 1988, the breed was approved for exhibition in the Non-Sporting Group. In 1993, the Finnish Spitz Club of America became a member of the American Kennel Club. Today, the breed is well established in Finland and Sweden, but remains relatively uncommon in the USA, ranking 147th out of 155 breeds and varieties registered by the AKC. Nearly 2,000 Finnish Spitz are registered with the Finnish Kennel Club each year, up from a total of 637 between 1890 and 1930. The Finnish Spitz has been the national dog of Finland since 1979, and is even mentioned in Finnish patriotic songs.