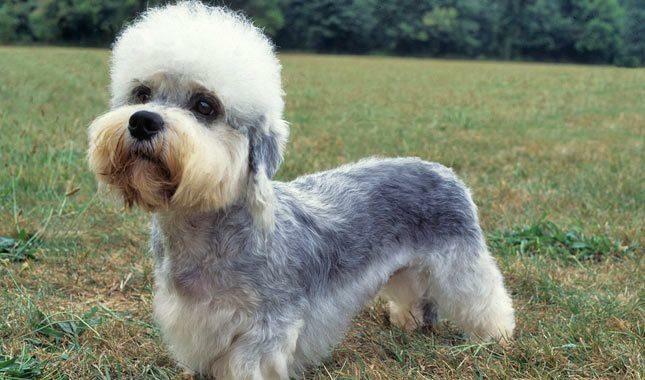 Dandie Dinmont Terriers were originally bred to hunt otters and badgers. Nicknamed the gentleman of the terrier family, they are quiet and reserved, but retain their terrier tenacity and love of the hunt. Although rare purebred dogs, some may end up in the care of shelters or rescues. The Dandie Dinmont Terrier’s small size and moderate exercise needs make them well suited to both city and country homes. Independent, but easy-going and affectionate, these dogs provide plenty of love for their humans without making excessive demands on exercise or grooming needs. However, they do not like to be left alone for many hours a day. If you can give this dog plenty of love and attention, you can expect to get ten times the devotion in return. AniMall24 recommends a good carrier for travelling with your little Dandie Dinmont Terrier. You should also buy a brush and massager for your dog.

If your Dandie Dinmont Terrier is overweight, he may have back problems. Dandie Dinmonts are independent and can be stubborn when it comes to housebreaking. Dandies are reserved with strangers and make good watchdogs. Dandies are reserved with strangers and make good watchdogs. Their bark is surprisingly loud and deep, but being a typically reserved breed, they can be trained to be quiet on command. Be sure to keep your Dandie on a leash when not in a secure area; because of their unusual appearance and small size, they may be a target for dog thieves. Although Dandies do well outdoors, they should be kept in your home when you cannot supervise them.Dinmonts Dandies are a rare breed. It can be difficult to find a reputable breeder, and even when one is found, you may have to wait several months for a litter to be born.Although Dandies are not usually aggressive dogs, they will not back down from a challenge from other dogs, regardless of their size. Be sure to keep your Dandie under control until you know that he and the other dog are friendly to each other.To get a healthy dog, never buy a puppy from an irresponsible breeder, puppy mill or pet shop. Look for a reputable breeder who tests their breeding dogs to make sure they are free of genetic diseases that can be passed on to puppies and that they have sound temperaments.

There are records of Dandie Dinmont Terriers being bred in the early 18th century, but the stories of how the breed developed are contradictory. Some believe it is a cross between Otterhounds and local terriers in the border region between Scotland and England, while others think the breed evolved from the wire-haired terriers common on farms. Others believe that the breed developed by crossing terriers with dachshunds (although it is unclear how the dachshunds, developed in Germany, would have been in the same proximity as the terriers). Whichever theory one wants to believe, the fact remains that Dandies are one of the oldest breeds of terriers. Unlike many breeds, the Dandie has not changed much since the early 1700s. Today’s Dandie Dinmonts closely resemble the one depicted in Gainsborough’s 1770 portrait of Henry, 3rd Duke of Buccleuch, although there are other breeds that can also claim to be the dog depicted with the Duke. Prior to that, terriers of all kinds were simply called terriers. As the owner of several dandies, Scott described them in his book as being owned by a farmer named Dandie Dinmont. From that book, the breed became known as Dandie Dinmont’s Terriers, the apostrophe and “s” being dropped over the years. In 1875, the Dandie Dinmont Terrier Club was formed in Scotland, and the standard for the Dandie Dinmont Terrier was written. Today, this club is the third oldest in the world. At its first meeting, many breeders could not agree on the correct size of the breed, as Dandies ranged in weight from under 10 pounds (used to hunt weasels and other small burrowing animals) to over 40 pounds (used to hunt otters, foxes and badgers). A compromise was reached and the breed standard – a written description of what the breed should look like – stated that dandies should weigh between 14 and 24 pounds. Otherwise, the standard was maintained in England and elsewhere in the world for over 100 years as it was written in 1876. In 1987, the British club and many others changed some of the wording of the standard, and over the years, the American standard has been modified and revised. Today, the Canadian Dandie Dinmont Terrier club is the only club in the world that still uses the original standard as a guide. The Dandie Dinmont Terrier came to be bred by many people and some have particularly interesting stories, such as that of Old Pepper, one of the best known dogs in the history of the breed. Old Pepper was supposedly caught in a trap on the estate of the 5th Duke of Buccleuch. Although his pedigree was unknown, he was bred and sired a son named Old Ginger, whose name can be found in the pedigree of almost every living Dandie Dinmont in the world today.Dandie Dinmonts became very popular in England in the late 19th century. Queen Victoria, an avid dog lover, owned a Dandie. It is not recorded when the first Dandies arrived in the United States, but the American Kennel Club registered a Dandie named Bonnie Britton in the first year of the Stud Book Register, in 1886.In the years leading up to World War II, there were many large and famous kennels breeding Dandies. However, during the war, many of these kennels were dispersed. Some even destroyed their dogs because there was not enough food to feed them and not enough people available to care for them. After the war, dedicated breeders worked hard to re-establish the breed. One of the most famous of these breeders was Bellmead Kennels, a large kennel in England. They bred a dog called Bellmead Delegate, who was an important sire and won many shows. Bellmead continued to breed Dandies until the early 1990s, when the kennel was sold to Battersea Dogs Home. Today the Dandie Dinmont Terrier is one of the rarest and most endangered of all breed dogs. The Kennel Club of England has placed it on its list of endangered native breeds and many fear it may become extinct.

Nemo knows how to go home