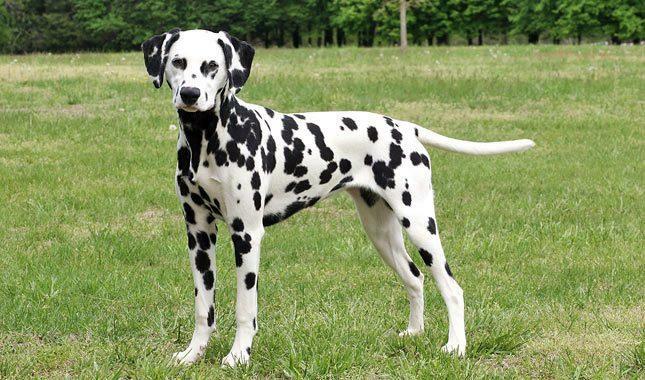 Best known for being the star of Disney’s 101 Dalmatians, this elegant and athletic Dalmatian dog breed has a history going back several hundred years. They started out as training dogs, but also performed many other roles, such as hunter, fire dog and circus performer. Although they are purebred dogs, you may find them in the care of shelters or rescue groups. Remember to adopt. Don’t go shopping if you want to take a dog home.As charming in life as they are in the movies, Dalmatians go from dapper to goofy and back to dapper again in the blink of an eye. They love to be part of everything their family does. They do have high energy levels and need lots of exercise. If you are looking for a running companion and a friend who will love you unconditionally, this may be the breed for you! See below for a complete list of Dalmatian characteristics.

Dalmatians need daily exercise or they will become bored and destructive. Frequent and thorough brushing can help keep shedding under control, but Dalmatians will shed.Dalmatians need training to help make them polite members of the family. Dalmatians need training to make them well-mannered members of the family. They can be stubborn, so without consistent and firm training they could end up with an unruly adult.Early socialisation with other dogs, cats and other small pets, children and adults is a necessity.Dalmatians do not like to spend long periods of time alone. Families with small children should be aware that Dalmatians are very exuberant and active dogs and may accidentally knock over small children.The animated and live-action films “101 Dalmatians”, both from Disney, caused an extreme rise in the breed’s popularity. Unscrupulous people looking to cash in on the boom bred Dalmatians indiscriminately, with little regard for health or temperament. To get a healthy dog, never buy a puppy from an irresponsible breeder, puppy mill or pet shop. Look for a reputable breeder who tests their breeding dogs to ensure that they are free of genetic diseases that can be passed on to puppies and that they have sound temperaments.

The origins of the Dalmatian are unknown. It is known that the spotted dogs travelled with nomadic bands of Roma, sometimes called gypsies, and it is unclear where they may have first appeared. The Dalmatian got its name during its stay in Dalmatia, a province located on the eastern shore of the Adriatic Sea, the area now known as Croatia.Dalmatians have been used for a variety of jobs during their long history, never specialising in one area. They were used as guard dogs in Dalmatia, shepherds, ratters, retrievers, circus dogs and training dogs. It was in England that the Dalmatian developed into the ultimate training dog. It was used to clear the way before the horses, to run beside the carriage or under the carriage between the axles. It protected the horses and carriage when they were at rest. This affinity led the Dalmatian to a different career in the United States. Here he became a firehouse dog, running with the horses to the fire, guarding the equipment during the fire and sometimes even rescuing people from burning buildings. When the excitement was over, they would accompany the fire trucks back to the station and resume their watchdog duty. Today most Dalmatians are companions and family members, but many fire stations across the country still keep Dalmatians as pets.