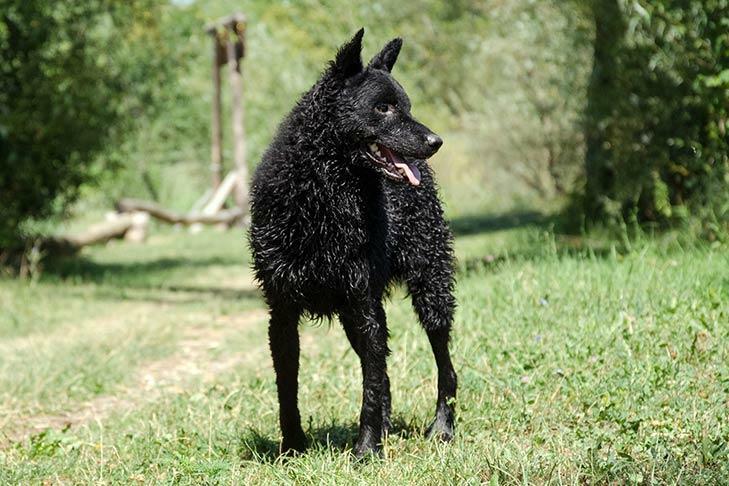 The Croatian Sheepdog is an ancient breed, believed to have been developed by the Croatians in the 7th century AD as a herding dog. These dogs are almost identical to their ancient appearance today. Fans of this breed love their intelligence and energetic character. They are sometimes called Hrvatski Ovčar, which is Croatian shepherd dog in the breed’s native language. Although they are purebred dogs, it is possible to find them in shelters and rescues. Remember to adopt. Croatian Sheepdogs may not be the best choice for novice owners, as this breed has a strong working drive and thrives on constant training and obedience work. They tend to become attached to a single human, and will go to great lengths to protect him, including barking at strangers. If you are a solitary dweller or an experienced pet parent looking for a dog that acts as your shadow and makes an excellent watchdog, the Croatian Shepherd may be the right breed for you! AniMall24 recommends a dog bed to give a good night’s sleep to your medium sized Croatian Shepherd. You should also buy a dog toy to burn off your puppy’s great energy.

The Croatian Sheepdog has a black, wavy and curly, weather-resistant coat. Croatian Sheepdogs have a black, wavy, curly, weather-resistant coat, which is generally solid, although some may have white patches around the chest and on the toes. A good weekly brushing should suffice, along with regular bathing, and these dogs are very energetic. Make sure your Croatian Shepherd Dog gets two or three half-hour to hour-long walks a day, with some active play sessions and shorter walks mixed in.Because the Croatian Shepherd Dog is so trainable, they make excellent family pets for children of all ages. However, they can be shy with some children. When it comes to other dogs, Croatian Sheepdogs are fairly neutral. Although some Croatian Sheepdogs are shy with new people, this is a highly trainable breed, and with proper and consistent socialisation, they can become outgoing and friendly with everyone.these dogs have a tendency to bark whenever they have something on their mind, which is often. Training and exercise can help to curb this behaviour.

The Croatian Sheepdog is an ancient breed, and many believe it was brought over by the original Croatians in the 7th century when they settled in what is now Croatia. Seven centuries later, Petar, Bishop of Dakovo, wrote a description of the Canis Pastoralis Croaticus, aka the Croatian Sheepdog, stating that it had not changed since it was brought over. However, it was not until 1935 that this intelligent and hard-working breed began to be perfected. Croatian veterinary professor, Dr. Stjepan Romic, began selectively breeding Croatian Sheepdogs for desirable traits. Many of the dogs he selected for breeding came from the Dakovo region, an area where much of the history of the Croatian Sheepdog was documented. More than 30 years later, in 1969, the Croatian Sheepdog was recognised by the Fédération Cynologique Internationale (FCI). The American Kennel Club (AKC) includes the breed in its Foundation Service, which is usually the last step before full recognition of the breed.

Nobody could touch Border Collie Kong – then he fell in love