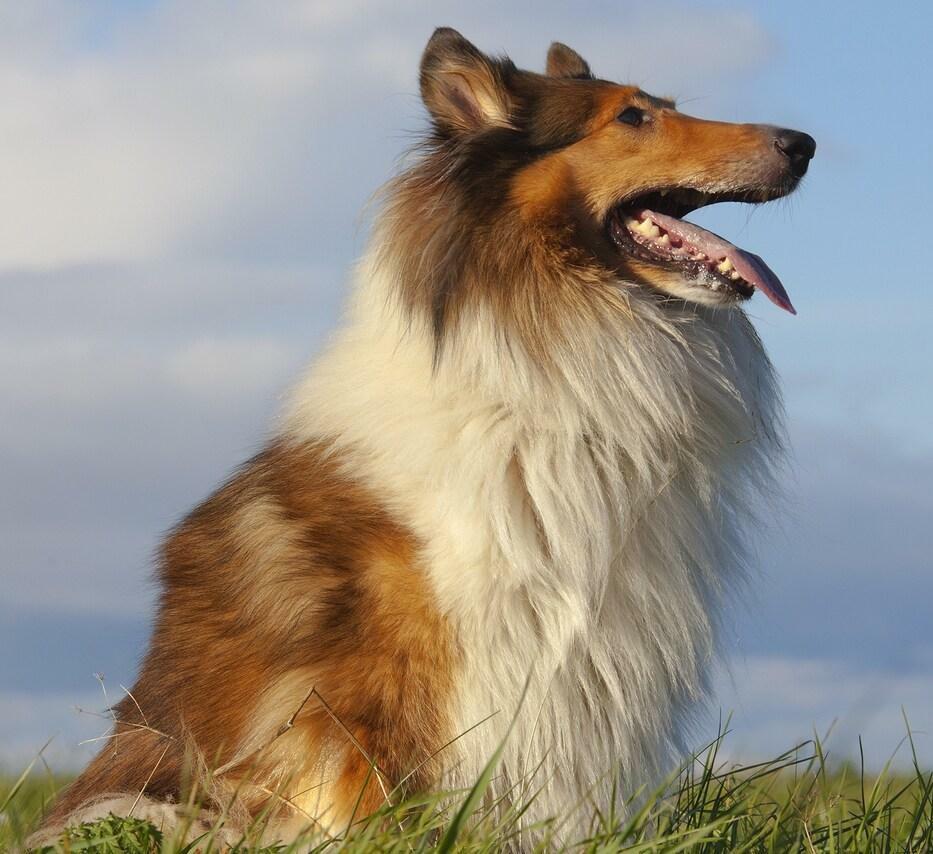 The Collie dog breed originated in Scotland, mainly from the Highland regions, but was also bred in the Scottish Lowlands and northern England, where it was used primarily as a herding dog. They make great family companions and are still capable herding dogs. Although they are purebred dogs, you may find them in the care of shelters or rescue groups. Remember to adopt. Don’t go shopping if you want to take a dog home.Collies are sensitive, intelligent dogs, known for their undying loyalty and uncanny ability to anticipate their owners’ needs. They are very affectionate with their families, but that sensitivity means they don’t mind being left alone for many hours of the day. Given plenty of love and companionship, they will give it back in spades to all members of their pack, including children.

The Collie is usually quiet unless it has a reason to bark. However, if left alone too often or if he is bored, he will bark excessively.Both varieties need to be groomed, but the Rough Collie especially needs regular brushing to keep his coat clean and free of tangles.Many Collies are sensitive to medications, including ivermectin, the drug used in heartworm preventatives. Be sure to talk to your vet before giving your Collie a heartworm preventative or any other medication.Be careful who you buy a Collie from. The popularity of the Collie has led to unethical breeders who act without regard to temperament, health or conformation. To get a healthy dog, never buy a puppy from an irresponsible breeder, puppy mill or pet shop. Look for a reputable breeder who tests their breeding dogs to ensure that they are free of genetic diseases that can be passed on to puppies and that they have a healthy temperament.

The Collie originates from Scotland, mainly from the Highland regions. It has been called Collis, Colley, Coally and Coaly, names which probably derive from col or coll, the Anglo-Saxon word for black. However, some historians believe the name comes from the colley, the black-faced Scottish sheep, which the Collie dog used to guard. The original Collies were more similar in size and shape to today’s Border Collies, and were predominantly black. Stone Age nomads brought dogs to what is now southern England, and from them emerged a hardy, intelligent dog that was used to herd sheep, cattle, goats and pigs. Some historians claim that the Collie’s particular ancestors were brought to the British Isles by Roman conquerors some two thousand years ago, and Queen Victoria is credited with saving Collies from oblivion. In 1860, she visited her estate in Scotland and fell in love with the good looks and gentle temperament of the Collies she saw. It was not long before the dogs were exhibited and bred for their good looks rather than their working ability. In 1860 they were first exhibited at a dog show in Birmingham, England, in the generic class known as “Scotch Sheep-Dogs”. A Collie, named Old Cockie, born in 1867, is credited with the characteristic type of the Rough Collie known today, and is believed to be responsible for the introduction of the sable coat colour to the breed. In 1879, the first Collie was imported to the United States. The Collie Club of America was formed on August 26, 1886, making it one of the oldest canine specialty clubs.