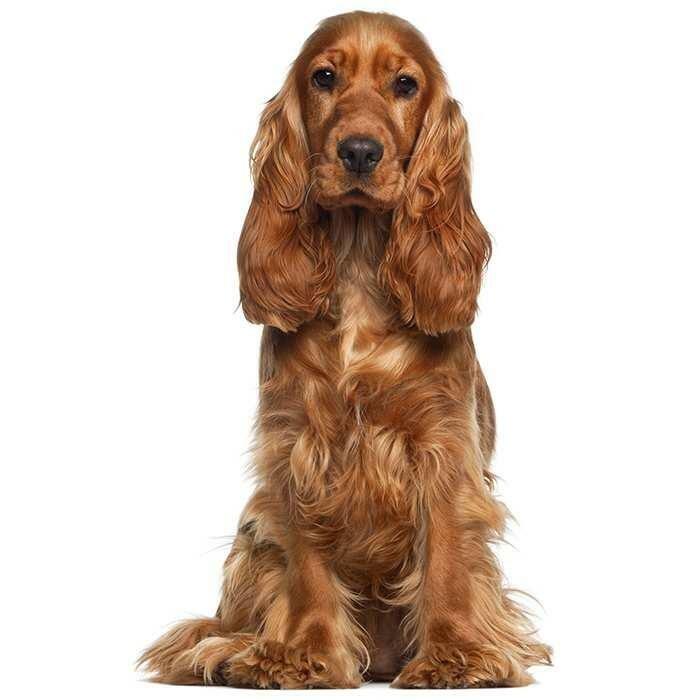 The Cocker Spaniel is primarily a much-loved companion dog breed, although it is still a very capable bird dog at heart. The Cocker is a much-loved companion dog, yet remains a very capable bird dog at heart. Whether in a flat or a large house with a backyard, the Cocker is a highly trainable and adaptable addition to the family. AniMall24 recommends a dog bed to give your medium sized Cocker Spaniel a good night’s sleep. You should also buy a dog brush and massager for your long haired puppy.

Because Cockers are so popular, it is especially careful to research breeders and find one who is dedicated to improving the breed.The sensitive Cocker Spaniel can be a little nervous, even when it is from a good breeder and has been properly socialised. Don’t be surprised if your Cocker exhibits submissive urination (urinating when excited).Cockers can be barkers, so responding to a “Quiet” command should always be part of this dog’s repertoire.The Cocker is eager to please and likes to be close to his family. But remember he was bred to be a hunting dog. Don’t be surprised if he chases birds or other small animals on a walk. Keep your Cocker on a leash whenever he is not in a fenced area. The Cocker has a “soft” personality. Harsh training methods will cause fear, so be sure to use gentle, consistent training for best results.A Cocker Spaniel’s long ears are both a part of its beauty and a potential health problem. Be sure to check your Cocker’s ears every week for infections.Keeping your Cocker’s coat beautiful is expensive and a lot of work. To get a healthy pet, never buy a puppy from a backyard breeder, puppy mill or pet shop. Look for a reputable breeder who tests their breeding dogs for genetic health and good temperament.

The modern Cocker Spaniel is descended from the Spaniel family, a large group dating back to antiquity. The word “spaniel” means “Spanish dog”, and is believed to have originated in Spain. In the 19th century, spaniels were divided into two groups: toy (mainly companion) and large hunting dogs. The hunting dogs were further divided into land and water spaniels. The Cocker Spaniel was so named because of its excellence in hunting woodcock in the field. In England, spaniels were a functional category, rather than an individual breed of dog, for several hundred years. The first kennel to gain recognition for the Cocker Spaniel as a distinct breed in England was Mr. James Farrow’s Obo kennel. In 1892, the Cocker Spaniel was recognised as a breed in England. Shortly before that, in the late 1870s, American fanciers began importing English Cockers into the United States. A liver and white Cocker Spaniel named Captain was registered in the first studbook of the National American Kennel Club (later renamed the American Kennel Club). The second volume of the studbook, printed in 1885, records a black Cocker named Brush II. This dog was imported from England by the Commings Cocker Spaniel Kennel of New Hampshire, just about this time, in 1881, Clinton Wilmerding and James Watson formed the American Spaniel Club. This club, the oldest in America, originally included breeders of many types of Spaniel. Over time, however, the breeders split into separate organisations as the differences between the Spaniel breeds were refined, and Cocker Spaniels quickly gained popularity with both breeders and the public. In time, some breeders began to favour a smaller type of Cocker Spaniel with a slightly different conformation to the original English Cocker. In 1936, a group of English Cocker breeders formed a specialty club known as the English Cocker Spaniel Club of America, and obtained AKC recognition for a type of English Cocker Spaniel. Two years later, to strengthen their position, the club passed a motion that English Cocker Spaniels should not be bred with American type Cocker Spaniels. In 1939, a Cocker Spaniel named CH My Own Brucie won the award for Best American Breed at the prestigious Westminster show, a feat he repeated the following year. Brucie, a black Cocker Spaniel, won the hearts of the American public, and his popularity was cemented at the 1940 show when, as he entered the ring, his owner/keeper removed Brucie’s leash, and the little dog proudly walked beside him, tail wagging. Brucie’s success at shows led to a dramatic rise in the popularity of Cocker Spaniels. It also encouraged American breeders to concentrate more on breeding for the show ring than for the field, further widening the gap between American and English Cockers. In 1946, the American Kennel Club recognised the American Cocker Spaniel and the English Cocker Spaniel as two distinct breeds.