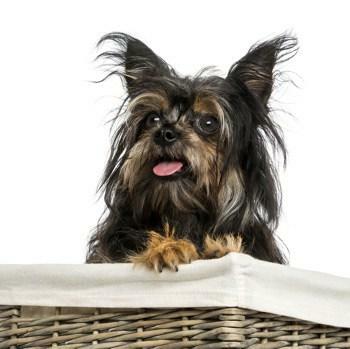 The Chorkie is a mixed breed dog–a cross between the Chihuahua and Yorkshire Terrier dog breeds. Playful, devoted, and outgoing, these small pups inherited some of the best traits from both of their parents.Chorkies go by several names, including Yorkiechi, Chiyorkie, Yorkie-chi, Yorkchi, York-chi, Chiorkie, and York Chi. Try saying that ten times fast! Despite their unfortunate status as a designer breed, you can find these pups in shelters and breed-specific rescues, so remember to adopt! Don’t shop!These adorable pups make excellent apartment dogs for active singles, and they’re also a nice match for large families. If you’re looking for a small, attention-loving dog with a big personality, then the Chorkie may be the right dog for you!

While the Chihuahua breed originates from Mexico, the Yorkshire Terrier hails from jolly old England. But the roots of the Chorkie mix dog breed are much closer to home and most likely right here in the United States. Although they may have existed naturally over the years, it wasn’t until the early 1990’s when designer breeders began to intentionally mix Chihuahuas and Yorkies, creating the adorable and lovable Chorkie.Once other designer dogs began to appear, breeders probably decided to mix the two parent breeds to produce an adorable little companion dog. Although the Chorkie started out as a designer breed, some have ended up in shelters or in the care of rescue groups. If you decide this is the mixed breed you need, consider adopting it.Check local shelters, look for Chorkie rescues, or check with breed-specific Yorkshire Terrier or Chihuahua rescues, as they sometimes help rehome mixed breeds.Chorkies are recognised by the following clubs:American Canine Hybrid ClubThe Designer Dogs Kennel ClubThe International Designer Canine RegistryDog Registry of AmericaThe Designer Breed Registry