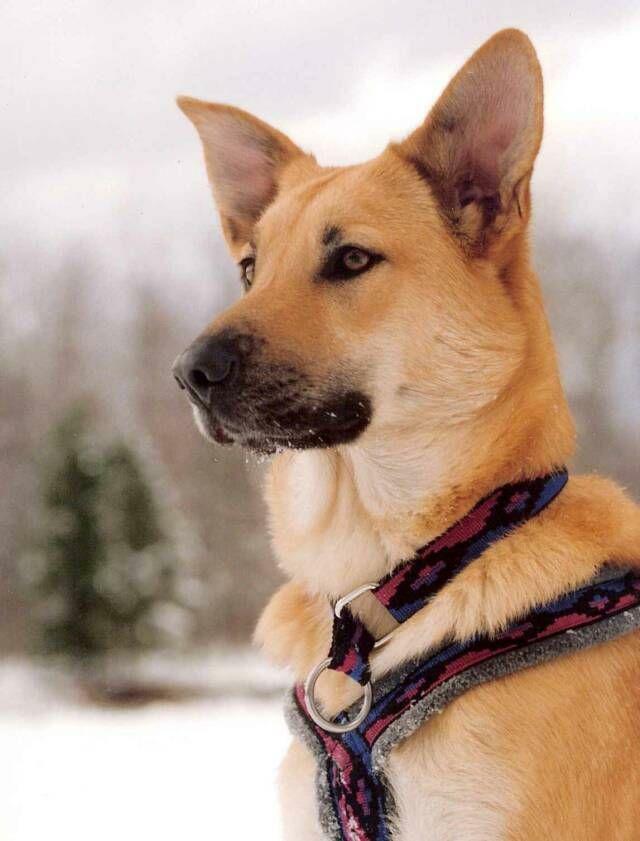 Created in the White Mountains of New Hampshire, the Chinook dog breed was first introduced on Admiral Byrd’s first Antarctic expedition in 1928. Today they are multi-purpose dogs that are happy hiking, competing in agility and other dog sports, pulling a sled or other means of transport, and playing with children.although they are purebred dogs, you may find them in the care of shelters or rescue groups. Remember to adopt. Don’t go shopping if you want to take a dog home. Chinooks are generally sensitive, gentle dogs with a pleasant demeanour. They are exceptionally intelligent and affectionate with their family members, including children and other dogs. However, novice parents should be cautious, because these dogs need experienced and consistent training. Although they can adapt to flat living, these dogs prefer homes with large yards to run in, and those yards must be secure. Chinooks are diggers, so make sure your yard fencing is sturdy and capable of preventing escape attempts like Houdini’s.

Chinooks have a mild, even temperament and are rarely shy or aggressive.Chinooks should live indoors with their people, preferably in a home where they have access to a securely fenced yard.Chinooks can be diggers.Chinooks need 30 to 60 minutes of exercise daily. They like to hike, jog and pull, whether it’s a sled, a cart or a person on skis or skates.Chinooks are smart and learn quickly, but if you are not consistent in what you ask them to do, they will take advantage of you.Chinooks are not barkers, but they can be talkative, whining and “woo-woo” to express their opinions. Chinooks have a thick coat and shed heavily twice a year; the rest of the year they shed small amounts daily.Chinooks need daily brushing to keep their coat clean, but baths are rarely necessary.Chinooks love children when raised with them, but can be reserved with them otherwise.Never buy a Chinook from a puppy dealer or pet store. Reputable breeders do not sell to middlemen or retailers, and there is no guarantee that the puppy has healthy parents. Reputable breeders perform various health tests to ensure that their breeding dogs do not pass on a predisposition to genetic diseases.Interview breeders thoroughly, and make sure the puppy’s parents have been tested for genetic diseases relevant to that breed. Ask breeders about health problems they have found in their dogs, and don’t believe a breeder who claims their dogs never have health problems. Ask for references to contact other puppy buyers to see if they are happy with their Chinook. Doing your homework can save you a lot of aggravation later on.

When Arthur Walden crossed a farm dog with a husky on his farm in Wonalancet, New Hampshire, little did he know that the result would be a legendary line of sled dogs.Walden, who had been a dog driver in Alaska for a time, brought the sport of sled dog racing to New England. One of the pups from that litter, named Chinook after the warm winds that melt the Alaskan snows, was noted for his good looks, temperament and working ability, and his pups followed in his footsteps.When Admiral Byrd was planning his Antarctic expedition in 1928, he turned to Walden and his Chinook dogs for transport. The original Chinook was part of the team.Byrd’s expedition was a success, with one terrible exception: Chinook, by then 12 years old, wandered off and was never found. In honour of the famous sled dog, a portion of Route 113A leading to Chinook’s hometown in New Hampshire was named the Chinook Trail.Walden retired after his adventures in Antarctica and passed the job of caring for the breed to Milton and Eva Seeley and Julia Lombard. Over time, the Chinooks earned the dubious title of the world’s rarest breed, according to the Guinness Book of World Records. At one point, there were only 28 dogs left, and it was then, in 1981, that several people began an attempt to save the breed. They succeeded, but Chinooks are still hard to find. They are recognised by the United Kennel Club and are in the process of seeking recognition by the American Kennel Club.