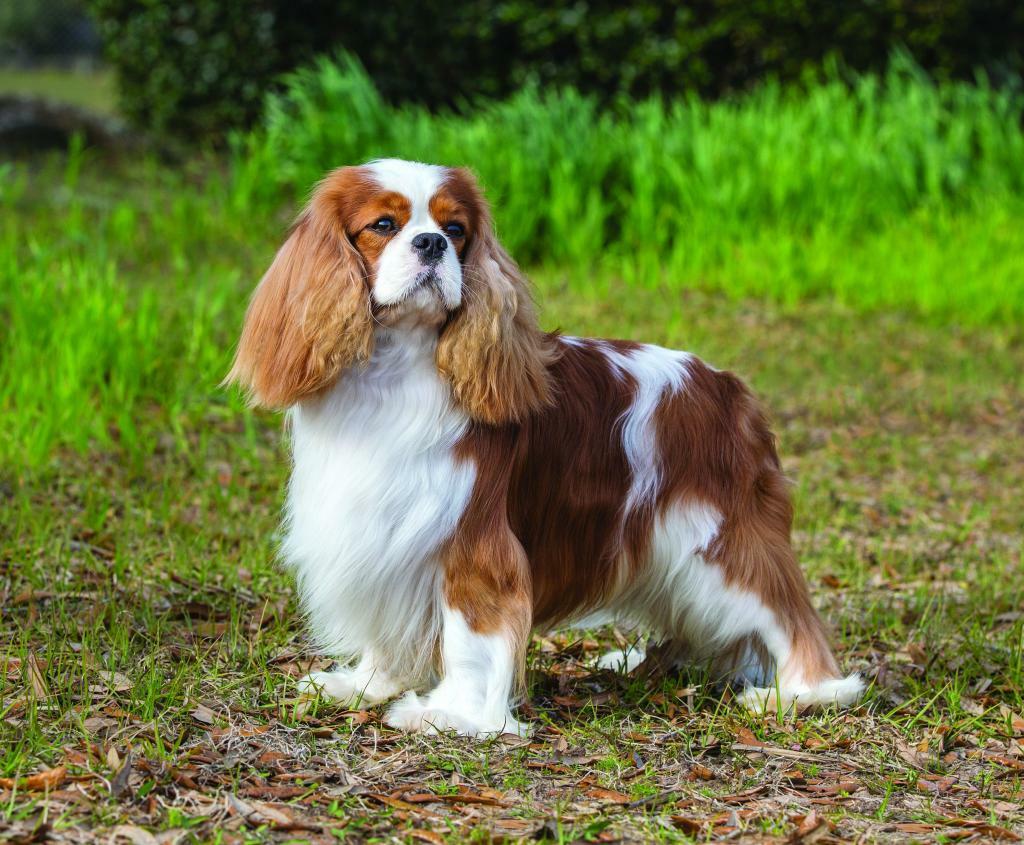 Although born to be a companion, the Cavalier King Charles Spaniel dog breed retains the sporting nature of their spaniel ancestors. If they’re not sitting on your lap or getting a belly rub, nothing makes them happier than tossing a bird and trying to retrieve it. Even though these are purebred dogs, you can still find them in shelters and rescues. Remember to adopt. Don’t buy if you want to take a dog home. Cavaliers, one of the largest toy breeds, are often as athletic as a true sporting breed and enjoy hiking, beach runs and dog sports such as agility, flyball and rally. Some have even demonstrated their prowess as hunting dogs. Calmer members of the breed are successful as family friends and therapy dogs.

Cavaliers have a dependent personality. They love to be with people and should not be left alone for long periods of time. Your Cavalier will shed, especially in the spring and fall. Regular combing and brushing is necessary. Since he is a spaniel at heart, he may try to chase birds, rabbits and other small prey if not kept on a leash or in a fenced yard. Cavaliers may bark when someone comes to their door, but because of their friendly nature, they do not make good watchdogs. Cavaliers are companion dogs and should not live outdoors. To get a healthy dog, never buy a puppy from an irresponsible breeder, puppy mill or pet store. Look for a reputable breeder who tests their breeding dogs to make sure they have no genetic diseases that can be passed on to the puppies and that they have a healthy temperament.

Although the Cavalier King Charles Spaniel is a relatively new breed, created less than a century ago, its prototype is the toy spaniel that has existed for centuries as the companion of royalty and nobility. Cavaliers are descended from the same toy spaniels depicted in many 16th, 17th and 18th century paintings by famous artists such as Van Dyck and Gainsborough. The spaniels in these paintings had flat heads, high ears and elongated noses. These little spaniels were a favourite of the royal and noble families of England. Mary, Queen of Scots, had a toy spaniel to accompany her as she walked to her beheading, and her grandson, Charles I, and great-grandson, Charles II – after whom the breed was named – also loved the little dogs. It is said that King Charles II, who reigned from 1660 to 1685, never went anywhere without at least two or three of these little spaniels. He even decreed that spaniels should be allowed in any public place, including the Houses of Parliament. It is claimed that the decree is still in force in England today, although no one has checked recently to see if it is true. After the death of Charles II, the popularity of King Charles Spaniels waned and Pugs and other short-faced breeds became the new royal favourites. King Charles Spaniels were bred with these dogs and eventually developed many of their characteristics, such as the shorter nose and domed head. There was one stronghold of King Charles Spaniels that were of the type that King Charles himself had loved so much, and that was Blenheim Palace, the estate of the Duke and Duchess of Marlborough. Here a variety of red and white Toy Spaniels continued to be bred, which is why Cavalier King Charles Spaniels with this colouring are today called Blenheim. As there was no breed standard and no dog shows yet, the type and size of the Toy Spaniels bred by the Dukes of Marlborough varied. However, by the middle of the 19th century, English breeders began to hold dog shows and to try to perfect the different breeds of dogs. At that time, it was accepted that the toy spaniel had a flat face, protruding jaw, domed skull and large, round, frontal eyes. The King Charles Spaniels depicted in paintings from earlier centuries were almost extinct. In the 1920s, an American named Roswell Eldridge began searching England for toy spaniels that resembled those in the old paintings. He searched for more than five years, and even took his search to the Crufts dog show, where he persuaded the Kennel Club (the English equivalent of the American Kennel Club) to allow him to offer £25 – a huge sum at the time – to the best dog and bitch of the type seen in the reign of Charles II. He offered this prize for five years. In 1928, Miss Mostyn Walker submitted a dog called Ann’s Son for judging and received the £25 prize. Roswell Eldridge did not live to see the prize claimed, as he had passed away just a month before Crufts. Interest in the breed was revived and a breed club was formed. The name Cavalier King Charles Spaniel was chosen to differentiate the breed from the flat-faced King Charles Spaniel (known as the English Toy Spaniel in the United States). The club held its first meeting on the second day of Crufts in 1928 and drew up a breed standard, a written description of what the breed should be like. Ann’s Son was presented as an example of the breed, and the club members collected all the copies of old pictures showing little dogs of this type. One thing on which all club members agreed from the outset was that Cavalier King Charles Spaniels should be kept as natural as possible and trimming and shaping the dog for the show ring was discouraged. The Kennel Club was reluctant to recognise the new breed, but finally, in 1945, after years of work by breeders, the Cavalier King Charles Spaniel was recognised as a separate breed. In the 1940s, two male Cavaliers were imported to the USA from England: Robrull de Veren and Bertie de Rookerynook. However, it was not until 1952 that Cavaliers had their true beginnings in the U.S. In that year, Mrs. (Sally) Lyons Brown of Kentucky received a black and tan bitch puppy named Psyche of Eyeworth from her English friend, Lady Mary Forwood. She fell in love with the breed and imported more. When she realised she couldn’t register her dogs with the American Kennel Club, she started contacting people in the United States who had Cavaliers. At that time, there were less than a dozen. In 1954, he founded the Cavalier King Charles Spaniel Club, USA (CKCSC, USA), the official breed club and sole registration body for the Cavalier King Charles Spaniel.