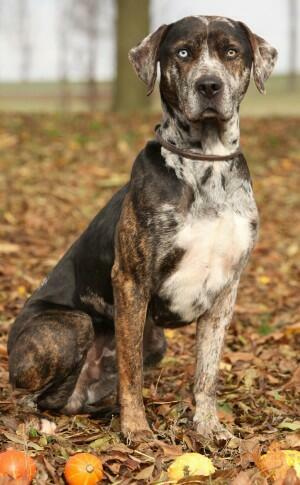 The Catahoula Leopard Dog breed has a striking appearance and a strong work ethic. They are a tough dog, bred to work in swamps and forests, and require a leader who is firm and steady, with time to keep them busy. Although these are rare purebred dogs, you may find them in the care of rescue groups or shelters. Remember to adopt. These puppies are very affectionate with humans, but they need plenty of exercise. They do best in a home with a large, fenced yard and experienced parents. If you can meet their needs, you will have a very loving family member to keep you on your toes.

The Catahoula should not live outdoors. It is a companion dog and does poorly in isolation. Because it can be aggressive with unfamiliar dogs, a Catahoula should never be walked off leash. Catahoulas are very intelligent and need firm, patient and consistent training. Catahoulas are energetic dogs that need at least one hour of vigorous exercise per day. Catahoulas shed lightly to moderately throughout the year. They need weekly brushing to remove dead hair and keep their coat shiny. The Catahoula needs early and frequent socialization, especially if you want it to be friendly with other animals. The Catahoula is not recommended for a shy or first-time owner. This breed needs a confident handler who is consistent and firm, but also affectionate. Catahoula puppies need sturdy and durable toys. The ideal home for a Catahoula is one with a fenced yard and opportunities for the dog to do its natural work of tracking and herding. Catahoula are protective of the children in your family, but they are not four-legged babysitters. Always supervise interactions between children and dogs. If properly socialized and educated, Catahoulas can get along well with other dogs and animals. It is important to understand that some Catahoulas may not get along with other animals and may need to live in single-animal households. Catahoulas can be aggressive with other dogs, especially if both are male. Catahoulas are watchful dogs and wary of strangers. Never buy a Catahoula from a puppy mill, pet store or breeder that does not offer health certificates or guarantees. Look for a reputable breeder who tests their breeding dogs to make sure they are free of genetic diseases that can be passed on to puppies and breeds for sound temperaments.

Named after a Choctaw Indian word meaning “sacred lake”, the Catahoula is native to northern Louisiana, near Lake Catahoula. It is probably the product of crossbreeding between local dogs and the hounds, mastiffs and greyhounds brought to the area by Spanish explorers. They are sometimes referred to as Catahoula curs, Catahoula leopard curs or Catahoula hounds, but the name was officially changed to Louisiana Catahoula Leopard Dog when it became the state dog of Louisiana. The Catahoula was used to track and corner wild hogs that roamed the woods, hence the name hog dog by which it is sometimes known. The Louisiana Catahoula Association was formed in 1976, followed by the National Louisiana Catahoula Association in 1977. Other organisations include the Catahoula Cur Breeders Association, which registers Catahoulas, and the American Catahoula Association, which works to promote and maintain the conformation and working ability of the breed through shows, clinics, trials and certified testing. Events include Treeing, Hog Bay, Cow Bay and Cow Trials. The breed was named a Louisiana State Dog in 1979. The United Kennel Club was the first national dog registry to recognise the Catahoula, in 1995. The Catahoula entered the American Kennel Club Foundation Service, which maintains rare breed registries, in 1996. He is not yet eligible for AKC recognition and cannot participate in AKC conformation events. The Catahoula is a unique dog with a fascinating heritage and a great working ability. He is not suited to live with every family, but when you commit to one and form a bond with him, you have a steadfast protector and a companion for life.