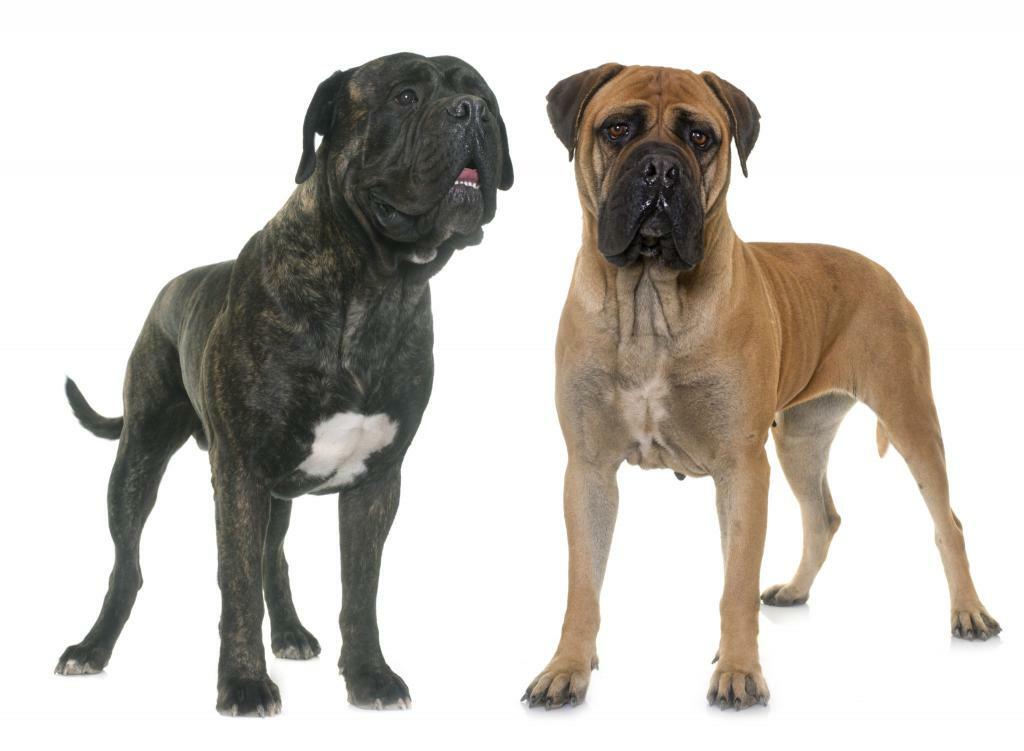 The Bullmastiff dog breed is a steadfast and fearless family guardian. Although they are aloof with strangers, they have a soft spot for their loved ones. Called the “silent watchdog,” this breed is nevertheless so gentle that they make excellent apartment dogs. They have a short, easy-care coat, but beware: These dogs drool. If you can spare a little drool, you’ll find a large, protective companion who will be happy to join you on your adventures, as long as you save him a spot on the couch afterward. AniMall24 recommends a good large, roomy cage for large Bullmastiffs to have a place to rest and relax. You should also buy a dog brush and massager for your short-haired puppy.

Bullmastiffs do not need much exercise and will be happy with a couple of short walks each day. Bullmastiffs can do well in families where both parents work. They are not overly concerned about being alone, but puppies will need someone who can come home to let them out to relieve themselves. Bullmastiffs shed little and require minimal grooming. Bullmastiffs can do well in apartments or condos because they are very quiet. Bullmastiffs can be aggressive with other animals if they are not well socialized. Bullmastiffs are prone to heat exhaustion and heat stroke, so they should be kept indoors when it is hot or humid. Bullmastiffs drool and may be prone to gas. If wiping drool bothers you, this is not the breed for you. Bullmastiffs need early training that continues throughout their lives. Training and socialization help curb unwanted aggression and willfulness. Large and affectionate, Bullmastiffs enjoy spending time with you on the couch, feet and lap. They take up a lot of space, but give you a lot of love in return. Bullmastiffs can be determined watchdogs and will protect your home and family with their lives if the need arises. Their size and confidence are a deterrent to intruders. Bullmastiffs are good with children, but may accidentally run over or step on small children. Bullmastiffs have a high pain threshold, so it can be difficult to determine if the dog is injured.

The Bullmastiff is a relatively modern breed that was developed in the mid 19th century, probably around 1860, by English gamekeepers who needed a large, calm, fearless dog with the speed to track poachers and the strength to hold them off. They probably experimented with various breeds in an attempt to create the perfect dog for their needs, but the one that worked was a cross between a Mastiff and a Bulldog. The Mastiff was big but not aggressive enough, while the Bulldog, brave and tenacious, lacked the size to knock down and hold a man. The popular crossbreed became known as the ranger’s night dog and worked and lived alongside the ranger and his family. The dogs were bred for their usefulness and temperament, with no thought given to their appearance, with the exception of a preference for a dark brindle coat, which allowed them to camouflage themselves at night. In time, poaching declined and the Bullmastiff took on a new role as a guard dog. As a result of the Mastiff’s influence, the fawn coat with black mask also became more common. It was not until the early 20th century that the Bullmastiff began to be bred as a distinct type rather than as a crossbreed. In 1924, the Kennel Club of England recognised the breed. The American Kennel Club followed suit in 1933. The first Bullmastiff registered by the AKC was Fascination by Fear of Criminals in 1934. Today, the Bullmastiff is ranked 40th out of 157 breeds and varieties registered by the AKC, a testament to its qualities as a companion animal.