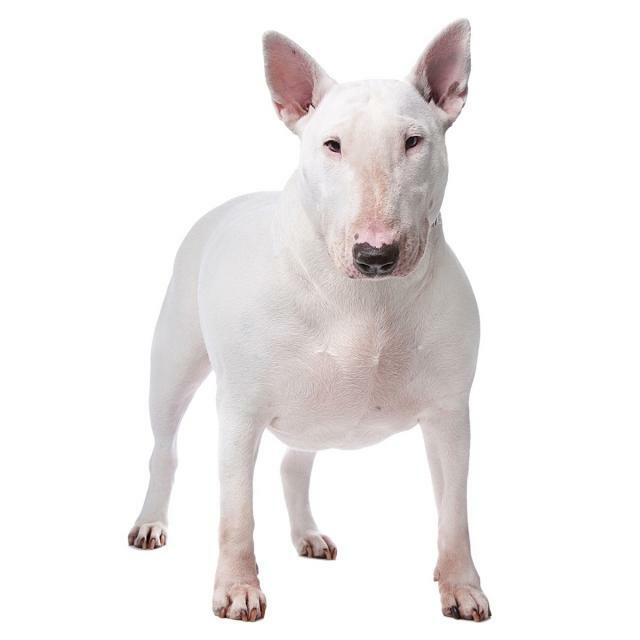 The Bull Terrier was originally developed in the 19th century as a fighting dog and later as a fashionable companion for gentlemen, but today they are a family companion and a show dog. They are a breed of dog distinguished by their long, oval head. Although they are purebred dogs, some may end up in the care of shelters or rescues. Consider adoption if this is the breed for you. This dog is a lover, not a fighter. In fact, Bull Terriers are known to be affectionate with all members of their household, especially children. However, their gentleness and love for people also means that they don’t like to be left alone for long hours. They want to be a part of all of their humans’ daily activities. Since they have high energy and intensity, these dogs need plenty of exercise and vigorous play time. If you can be firm and consistent with training, stay active to keep up with your puppy, and provide plenty of love and attention, then this dog can be your new best friend! AniMall24 recommends a good dog bed to give your medium sized Bull Terrier a good night’s sleep. You should also buy a dog brush and massager for your short haired puppy.

Bull Terriers thrive in the company of their people, and should live indoors with their human family. They do not do well when left alone for long periods of time and wreak havoc when bored. Bull Terriers are not suited to cold, wet climates. Keep your Bull Terrier warm with a coat or sweater in winter. They are not high maintenance dogs. A weekly brushing and occasional wiping with a damp cloth is usually all that is needed to keep them clean, although they should be brushed more frequently during shedding periods that occur twice a year. The Bull Terrier needs 30 to 60 minutes daily of exercise, play and mental stimulation. Ownership of Bull Terriers is restricted or prohibited in some cities, states and provinces. Research local dog laws before acquiring one; banned dogs may be confiscated and euthanized. The Bull Terrier has a strong character and can be difficult to train. It is not recommended for shy or first-time dog owners. Without early socialization and training, the Bull Terrier can be aggressive towards other dogs, animals and unfamiliar people. Bull Terriers are too rough and tumble for households with young children, but are tireless playmates for active older children who have been taught to interact with dogs. Never buy a Bull Terrier from a puppy mill, pet store or breeder that does not offer health certificates or guarantees. Look for a reputable breeder who tests their breeding dogs to make sure they are free of genetic diseases that can be passed on to puppies and breeds for sound temperaments.

The Bull Terrier dates from about 1835 and was probably created by crossing a Bulldog with the now extinct white English Terrier. These “bull and terrier” dogs were later crossed with Spanish pointers to increase their size. They were known as gladiators for their prowess in the dog fighting ring. In 1860, bull and terrier fanciers, particularly a man named James Hinks, set out to create an all-white dog. These striking animals became fashionable companions for gentlemen and were nicknamed the “White Cavalier” for their bravery in dog fights and their courtesy to people. Although no longer used for fighting, white Bull Terriers continue to be so nicknamed, in homage to their sweet disposition (which, of course, is shared by coloured Bull Terriers). The first Bull Terrier registered by the American Kennel Club (AKC) was Nellie II in 1885. Twelve years later, in 1897, the Bull Terrier Club of America was formed. The coloured Bull Terrier became a separate variety in 1936, and the Miniature Bull Terrier became a separate breed in 1992. Among the best-known Bull Terrier aficionados are General George S. Patton, whose white Bull Terrier Willie followed him everywhere; actress Dolores del Rio; writer John Steinbeck; and President Woodrow Wilson. A well-known Bull Terrier is Patsy Ann, who greeted every ship docking in Juneau, Alaska, during the 1930s. Beloved by tourists, she was photographed more often than Rin Tin Tin, and in 1934 she was named the official greeter of Juneau. Today, Patsy Ann’s spirit lives on in a bronze statue that was commissioned and placed on Juneau’s waterfront in 1992. A Bull Terrier was featured in Sheila Burnford’s book “The Incredible Journey” as well as in the first film version of it, but that film did not have the same effect on the breed as the 1980s-era Budweiser commercials starring Bull Terrier Spuds Mackenzie. When the ad campaign aired, the breed’s popularity skyrocketed. A coloured Bull Terrier made history in 2006, when Ch. Rocky Top’s Sundance Kid (Rufus to his friends) became the first coloured Bull Terrier to win Best in Show at the Westminster Kennel Club dog show. The only white Bull Terrier to win the prestigious event was Ch. Haymarket Faultless in 1918. The breed’s appearance has changed quite a bit – for the better, breeders say – since then. Today, Bull Terriers rank 61st in popularity among breeds and varieties registered by the American Kennel Club, up from 85th in 1996. Miniature Bull Terriers rank 129th.

Why do cats drool – and is it dangerous?