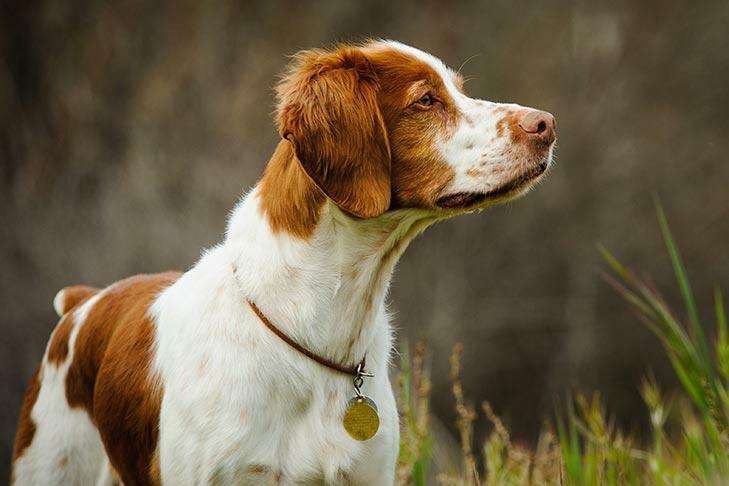 Brittanys were bred as hunting dogs, and they definitely have birds on the brain. Although they are often called Brittany Spaniels, the American Kennel Club dropped the word “spaniel” from the name of this show breed in 1982. These energetic dogs are versatile family companions and hunting dogs that work more closely with hunters than other pointing breeds. If you can meet their energy and exercise needs, this may be the breed for you. AniMall24 recommends a good dog bed to give your medium-sized Brittany a good night’s sleep. You should also buy a dog water bottle for any outdoor adventures you have with your pup.

Brittanys are very energetic dogs. They need at least one hour of intense exercise every day. Without sufficient exercise, your Brittany can become neurotic and destructive. Brittanys are intelligent and need mental stimulation as well as physical exercise. Dog sports training is a great way to provide this. Brittanys do not respond well to rough handling. Be gentle and consistent but firm – don’t let them run the house. Brittanys are people-oriented and do not like to be left alone for long periods of time without something to keep them busy. If you work outside the home, you should consider having two Brittanys to keep each other company. Although they are friendly and like children, it is not recommended that you let your young children play with your Brittany unsupervised. Your Brittany has so much energy and enthusiasm that it could accidentally hurt your child. To get a healthy dog, never buy a puppy from an irresponsible breeder, puppy mill or pet store. Look for a reputable breeder who tests their breeding dogs to make sure they are free of genetic diseases that can be passed on to puppies and that they have a healthy temperament.

Brittany takes its name from the Celtic area of north-west France that was once an independent kingdom. Brittany lies just across the English Channel from Wales, and for over a thousand years there was a great deal of trade between the two countries, with dogs certainly being part of that trade. It is easy to see, just from their colouring and other physical characteristics, that the Brittany Springer Spaniel and the Welsh Springer Spaniel probably had common ancestry. The earliest records of Breton-type dogs are visual: paintings and tapestries dating from the 17th century. They show a liver and white dog pointing at partridge. Modern Bretons began to take shape in the mid-19th century in Pontou, a small town in Brittany. They are said to have been the result of a cross between a white and mahogany bitch owned by a French hunter and a white and lemon male brought to Brittany to hunt by an English sportsman. Of the two puppies they produced, one was considered to have the necessary hunting ability and became a popular stud dog in the area. The result was droopy-tailed dogs that pointed and retrieved. They were apparently highly prized by poachers in the area for their speed, agility and willingness to follow direction. Around the same time, dog shows became popular in Britain and other parts of Europe, including, of course, France. Bretons moved effortlessly from the field to the show ring and were recognised as a breed in France in 1907. The first French Breton registered in that country was an orange and white dog named Boy. Bretons did not arrive in the United States until 1931, but once they became known, their popularity increased. The first Brittany registered with the American Kennel Club was Edir du Mesnil, in 1934. The American Brittany Club was formed in 1942 and rewrote the French standard to suit their needs. Like so many other breeds, the Bretons suffered a decline as a result of World War II. In France, Breton breeding stopped during that time. After the war, French breeders decided to allow black spotted dogs in the standard because the gene pool had been depleted throughout Europe. American breeders did not follow suit. Even today, black is not an accepted colour for Brittanys in the USA and Canada, but it is accepted in all other countries. For many years, many breeders wanted to remove the word “spaniel” from the breed name because Brittanys are show dogs, not gun dogs like spaniels. In April 1982, the AKC Board of Directors approved the name change to Brittany, removing the word “spaniel” as part of the name. However, in other countries they are still called Brittany Spaniels. Today, the Brittany is ranked 31st out of 155 breeds and varieties registered by the AKC.