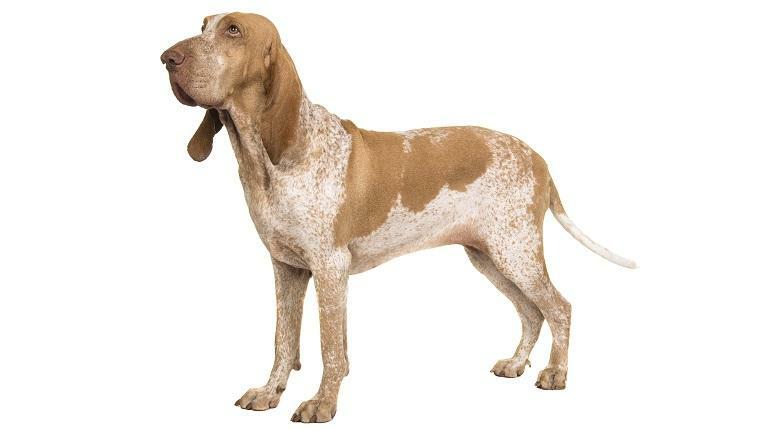 In its native Italy, the Bracco Italiano is known as a hunting dog breed, but it is also making a name for itself as a sweet and affectionate family companion. With its long ears, drooping lips, and soulful expression, the Bracco Italiano has a distinctive look. It is believed to be an ancient breed, dating back to the 4th or 5th century BC. The Italian Bracco Italiano goes by other names, such as Italian pointer, Italian pointing dog, and Bracco. If this dog breed interests you, you can find these adorable pups at breed-specific shelters or rescues. Remember, it’s always best to adopt and not buy. These intelligent dogs have an endless amount of energy and do best in homes with yards. The Bracco is also suitable for all households, from singles to large families with children. Although they are not watchdogs, they will alert you if they sense a change in their environment. If you want an energetic dog that will keep you on your toes and love you unconditionally, the Italian Bracco may be the right dog for you.

The short, dense, glossy coat of the Bracco can be white; white with orange or dark amber markings; white with chestnut markings; white with pale orange mottled markings; or white with roan-brown markings. These dogs have a high energy level. Make sure your dog gets at least one good half-hour to hour-long walk a day, with some good active play sessions and shorter walks mixed in. Dogs of this breed are not meant to be watchdogs, as they do not bark often. They are generally calm and will stay by your side most of the time. Since the Bracco Italiano is a large dog, they can handle the play of overly excited children. Even so, these calm dogs prefer children or adults who know how to play with them gently. It is best that they soon get used to other pets. However, the Bracco Italiano prefers the company of their human families rather than with other smaller pets.

The Bracco Italiano is a large breed of dog originating in Italy and is considered to be the oldest European Pointer. Paintings depicting dogs resembling today’s Bracco Italiano date back to the 4th and 5th centuries B.C., and in the 14th century frescoes of dogs resembling this breed appear in Italy during the Renaissance. Some historians believe that the Bracco Italiano was originally a cross between a Segugio Italiano and the Asiatic Mastiff. These hunting dogs were popular with noble Italian families, having been bred by the Medici and Gonzaga families. Initially, their function was to bring game into the nets or to drive birds and other prey away from the falconers. Later, when hunters began to use firearms, the Bracco was used to retrieve game. The population of the Italian Bracco declined in the early 20th century. An Italian breeder named Ferdinando Delor de Ferrabouc revived the breed and founded the Societa Amitori Bracco Italiano. Today, the breed is popular in Europe and the United States, and can still be seen as a hunting and working companion. In 2006, the United Kennel Club (UKC) recognised the Bracco Italiano as a purebred dog. A year later, the Bracco Italiano Club of America was formed to encourage the American Kennel Club (AKC) to recognise the breed as well. The AKC has included the breed in its Foundation Stock Service since 2001 and has allowed them to compete in certain events since 2010, but until now, they have not granted the breed full recognition.