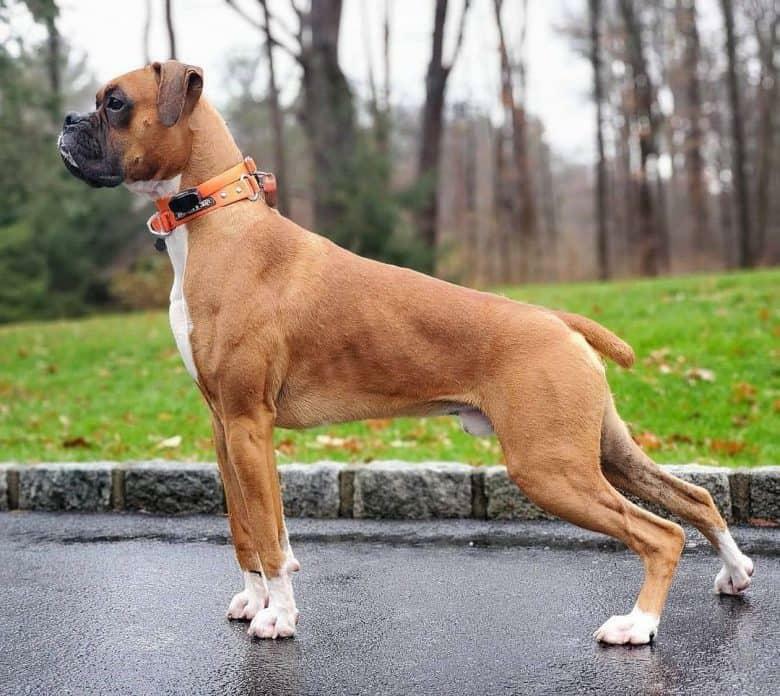 Boxer dogs were originally bred to be medium-sized guard dogs. Today, although they are part of the AKC Working Group, Boxers mostly find homes as loving family companions. That said, they still maintain their high energy levels and need plenty of exercise. Square-jawed and muscular, this breed is the George Clooney of the dog world: a handsome with a sense of humor and an underlying sweetness. They adore their families and will also appreciate consistent training that doesn’t rely on harsh reprimands. If you are looking for a high energy, easy to clean, family dog, then this just may be the breed for you! AniMall24 recommends a good dog bed to give your medium sized Boxer a good night’s sleep. You should also buy a dog toy to burn off your puppy’s high energy.

Boxers are high-energy dogs and need lots of exercise. Make sure you have the time, desire and energy to give them the play and activity they need. Boxers are exuberant and will greet you with enthusiasm. Early and consistent training is critical, before your Boxer is too big to handle. “Their short noses and short hair make them uncomfortable in hot and cold climates, and they need to be kept as house dogs. Boxers mature slowly and act like unruly puppies for several years. Boxers not only like to be with their family, they need to be with their family. If left alone for too long or kept in the backyard away from people, they can become moody and destructive. Boxers drool, and a lot of it. Boxers also snore, loudly. Although they have short hair, Boxers shed, especially in the spring. Boxers are intelligent and respond well to firm but fun training. They also have an independent streak and do not like to be bossed or treated harshly. You will have the most success in training your Boxer if you can make it fun for him. Some Boxers take their guarding duties too seriously, while others show no guarding instinct at all.

The ancestors of the Boxer were the German Bullenbeisser – a dog descended from mastiffs – and the Bulldog. The Bullenbeisser was used as a hunting dog for centuries to hunt bear, wild boar and deer. Its task was to catch and hold the prey until the hunters arrived. In time, the Bullenbeisser lost its job on the farms and began to be used by farmers and butchers to guard and drive cattle. The Boxer as we know it today was developed at the end of the 19th century. A Munich man named Georg Alt bred a brindle coloured female Bullenbeisser named Flora to a local dog of unknown origin. In the litter was a fawn and white male who was named Lechner’s Box. This is believed to be the beginning of the line that would become the Boxer we know today. Lechner’s Box was bred to his dam, Flora, and one of the litters was a bitch named Alt’s Schecken. She was registered as a Bierboxer or Modern Bullenbeiser. Schecken was crossed with an English Bulldog named Tom to produce a dog named Flocki, who became the first Boxer entered in the German Stud Book after winning at a Munich show which had a special event for Boxers. Flocki’s sister, a white bitch, was even more influential when she was crossed with Piccolo von Angertor, a grandson of Lechner’s Box. One of her offspring was a white female named Meta von der Passage, who is considered to be the mother of the Boxer breed, although photographs of her show that she bore little resemblance to the modern Boxer. John Wagner, author of The Boxer – first published in 1939 – had this to say about her: “Meta von der Passage played the most important role of the five original ancestors. Our great sire lineage can be traced directly back to this bitch. She was a stoutly built bitch, low to the ground, brindle and white in colour, with no jaw and an excessive lip. As a producing bitch, few in any breed can match her record. She consistently gave birth to puppies of wonderful type and uncommon quality. Her offspring, sired by Flock St. Salvator and Wotan, are the most dominant today. “In 1894, three Germans named Roberth, Konig and Hopner decided to stabilise the breed and exhibit it at a dog show. This was done in Munich in 1895, and the following year they founded the first Boxer Club. The breed became known in other parts of Europe in the late 1890s. Around 1903, the first Boxers were imported into the USA. The first Boxer was registered by the American Kennel Club in 1904, a dog named Arnulf Grandenz. In 1915, the American Kennel Club (AKC) recognised the first Boxer champion, Sieger Dampf v Dom, owned by Governor and Mrs Lehman of New York. There were not many Boxer bitches in the USA to breed with him, so he did not have much influence on the breed. When World War I broke out, Boxers were enlisted in the army, serving as messenger dogs, carrying packages and acting as attack and guard dogs. Boxers began to become popular in the USA in the 1940s, when soldiers returning home from World War II brought their Boxer pets with them. Thanks to them, the breed became known to more people and soon became a favourite pet, show dog and guard dog. The American Boxer Club (ABC) was formed in 1935 and was accepted by the AKC the same year. In the early days, there was much controversy within the club over the standard of the Boxer. In 1938, the club finally approved a new standard. The latest revisions to the standard were made in 2005. Today, the Boxer ranks seventh out of 155 breeds and varieties registered by the AKC.