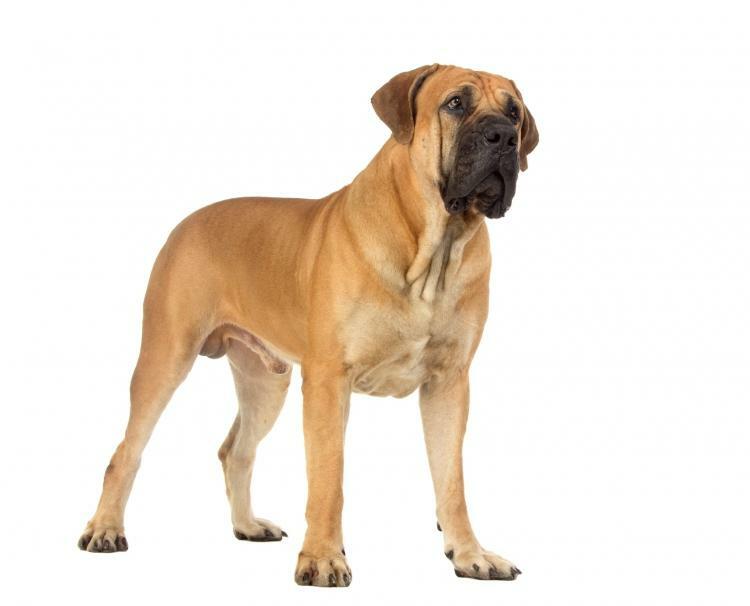 At first glance, you might think that the large and intimidating Boerboel would make an excellent watchdog, and you would be right. However, this breed is equally known for being affectionate, calm and family-oriented, especially with children. These giant protectors were bred to help South African farmers defend their land from hyenas, lions and all manner of deadly wildlife, while providing invaluable companionship. The Boerboel, pronounced “boo-r-bull,” gets its name from Dutch/Afrikaans words that roughly translate as “farmer’s dog.” ” It is also known as the South African mastiff, South African boerboel, borbull or bole. Although Boerboels are generally docile, easy to groom and have few health problems, don’t make the mistake of thinking they are an easy breed for first-time owners to handle. These dogs are confident, territorial and prone to pulling and biting. They need an assertive, experienced owner with plenty of room for a huge dog that needs exercise. If you are interested in adopting a Boerboel, make sure you and your household are up for the challenge. If you are, you will be rewarded with a loyal and protective friend for life.

The Boerboel is a huge and incredibly muscular dog. It weighs as much as the Great Dane, although it is significantly shorter in stature. There is much speculation about the breeds that were crossed to give rise to the modern Boerboel, but their exact ancestry is not well known. Dutch settlers brought dogs to South Africa to defend farms from big cats and other wild animals. Only the strongest dogs were able to survive the harsh climate and conditions of South Africa, and they became some of the ancestors of the modern Boerboel. After the World Wars, breeding was unregulated and the Boerboel almost completely disappeared. It has reemerged after breed enthusiasts initiated an effort to restore the Boerboel in the 1980s. Boerboels are known to be especially affectionate and protective of their human offspring. They are excellent guardians, although they can be overprotective. The Boerboel has minimal grooming needs and few health problems, although their need for training and socialization makes them a poor choice for novice owners. Since the Boerboel has recovered in South Africa, they have grown in popularity and have been exported around the world. Even so, they are still considered a rarer breed. Although their average weight ranges from 110 to 200 pounds, it is not unheard of for Boerboels to weigh more than 200 pounds. The Boerboel is considered the most agile of the Mastiff-type dogs. Socialization is necessary for Boerboels, as they can be aggressive with other dogs, especially those of the same sex and breed.

The name “Boerboel” comes from the Afrikaans/Dutch words meaning farmer (“boer”) and dog (“boel”), and they were in fact farmers’ dogs when they were bred by Dutch settlers in South Africa from the 1600s onwards. They were needed to defend the farm and hunt dangerous animals such as hyenas, baboons, leopards and other big cats. European settlers brought large, strong dogs to South Africa, which bred with the indigenous domestic dogs and a variety of other breeds over several centuries. The English also brought Bulldogs and Mastiffs, which interbred with Boerboels, and the Da Beers diamond mining company imported Bull Mastiffs to guard their mines, which also interbred with Boerboels to make them what they are today. It is not known exactly which breeds make up the Boerboel’s ancestry, but only the strongest dogs were able to survive the hot climate and encounters with wildlife, which contributed to the Boerboel’s tenacity and strength. During the 19th century, settlers began to protest against British rule in South Africa and moved inland. As a result, their dogs were dispersed and were often taken in by isolated communities, where they became necessary for hunting, herding, guarding and protection against dangerous people. After the World Wars, South Africa became more urbanised and Boerboels began to interbreed with other dogs without regard for breed purity. However, in the 1980s, a group of breed enthusiasts tried to breed pure Boerboels again. Through their efforts, the Boerboel gained popularity in South Africa and began to be exported all over the world. However, the breed is still quite rare outside South Africa.