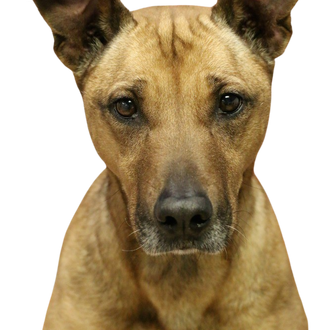 Energetic, fearless, and strong, the Black Mouth Cur is valued as a versatile working dog bred to assist farmers and hunters in the rugged terrain of the southeastern United States. The breed can herd livestock, protect the home, and track game; although these dogs also have a sensitive side that does not respond well to harsh reprimands or punishment. The Black Mouth Cur loves to be around humans and family and is great with children. However, its high exercise needs make this breed not a good choice for novice owners or those who cannot maintain a demanding energy level. Their tendency to play rough may not be best for very young children. Black Mouth Curs live primarily in the United States and are somewhat rare in other parts of the world. If you’d like to take home one of these strong but sensitive, energetic, family-friendly dogs, check out our adoption page, where you can search for dogs near you by breed.

It is a working dog that is comfortable as a hunting companion, livestock herder and protector of the home. The Black Mouth Curs has minimal grooming needs and moults moderately. One brushing a week should be sufficient. The breed is incredibly loyal to their human family, especially children, although their tendency to play roughly may make them unsuitable for very young children. There are several breeders of Black Mouth Curs that can produce differences in size, coat and personality traits. Black Mouth Curs require a handler who is able to keep a firm hand, but these dogs are very sensitive and do not respond to harsh reprimands. Training sessions should be thorough and productive, but short enough to keep the dog’s attention. This breed is not the best choice for inexperienced owners. The Black Mouth Cur is energetic and needs a yard to run and burn off energy, as well as a minimum of one long walk a day. Anything less can lead to boredom and destructive behavior. Black Mouth Curs are not apartment dogs. Black Mouth Curs are considered to be generally healthy dogs and less prone to several of the conditions that affect other purebreds, although they do have some genetic predispositions that owners should be aware of and watch for. In the novel Old Yeller, the titular dog is a Black Mouth Cur, although the dog that played Old Yeller in the 1957 film adaptation was a Labrador Retriever/Mastin mix named Spike.

The origin of the Black Mouth Cur breed is a mystery, but what is known is that the breed originated in the southern United States, most likely Mississippi or Tennessee. This breed likely descends from European and Asian hounds that were brought to North America and used by pioneers and settlers who hunted and farmed the land from Florida to Texas. They needed a farm dog that could help them herd cattle and hunt in the rough terrain of the region, as well as protect themselves from dangerous wildlife. The Black Mouth Cur played an important role in establishing the American frontier, with some claiming that westward expansion by European settlers would not have been possible without the breed. During those times, dogs were interbred with other dogs as needed, and keeping records on the breeds in use was not of great importance. The lack of records contributes to the unknown details when it comes to the origin of the Black Mouth Cur. Some speculate that English Mastiffs, brought to America from Europe as early as the Mayflower’s voyage to Plymouth in 1621, played a role in the descent of the Back Mouth Cur. Whatever the case, it is difficult to determine exactly when purebred Black Mouth Curs first appeared, and even today, there is variation in the breed depending on the region and the specific breeder that produces them. Still, they are considered purebred dogs, as modern Black Mouth Curs are generally only intentionally bred with other Black Mouth Curs. The Ladner family in southern Mississippi has bred Black Mouth Curs for over 100 years and may be the best known breeder of these dogs. Other variations include the Alabama Black Mouth Cur, known for its red coloration, and the Florida Black Mouth Cur, recognizable by its yellow fur. All of these variations have made it difficult to establish breed standards, which is why several kennel clubs do not recognize the breed, including the American Kennel Club. The United Kennel Club, however, registered Black Mouth Cur in 1998, and now they appear in the ring. The most famous Black Mouth Cur is the titular dog from the novel Old Yeller. Although the Black Mouth Cur breed is not mentioned by name, the physical description of the dog, as well as the description of its temperament and behavioral characteristics, largely implies that the Old Yeller is a Black Mouth Cur.