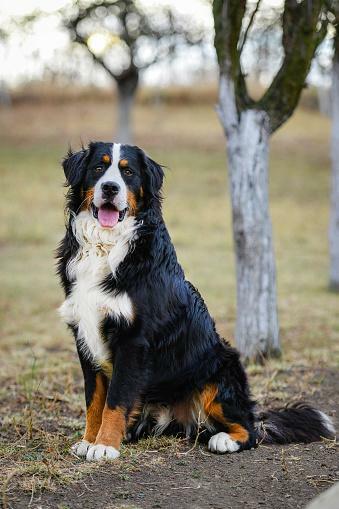 The Bernese Mountain Dog is an extremely versatile working dog from the farmlands of Switzerland. They were developed to herd livestock, pull carts and be guard dogs and loyal companions. It is one of four types of Swiss Mountain Dogs, and the only one with long hair. The Bernese Mountain Dog comes from the canton of Bern, hence its name. It is a large and robust dog breed, with a friendly and calm character, and is also well suited for conformation, obedience, tracking, herding and cart competitions. Novice parents may be attracted to the friendly character, intelligence and great trainability of this breed. However, first-timers should be cautious. The Bernese Mountain Dog’s size and high energy can make it difficult to handle. Therefore, they do not like to be cooped up in apartments all day. They bite a lot, and often need to have drool wiped off their faces from time to time. Dogs of this breed make great watchdogs, but that also means they have a tendency to bark, loudly. They may want to chase smaller animals and play roughly, although they are quite tame when fully mature and properly trained. However, for an experienced pet parent who can match the Bernese’s energy, provide open space, keep up with grooming, and devote time and effort to training, this breed will show unconditional love and loyalty. A well-trained Bernese is an excellent companion that will adore the entire family. They adore children and will even warmly welcome newcomers into the home, provided they have received proper socialization training. Not many breeds are more predisposed to friendliness. Therefore, if you are up for the challenge, you will never regret adopting a Bernese Mountain Dog.

Bernards have numerous health problems due to their small genetic base, and perhaps other as yet undiscovered reasons. Currently, the life span of a Bernese Mountain Dog is comparatively short, about six to eight years, although in recent years the life expectancy has risen to about ten years. This may be due to more responsible breeding and consideration of genetic conditions. Due to the popularity of the calf, some people have bred lower quality dogs to sell the puppies to unsuspecting buyers. Often, these dogs are purchased at auctions and little is known about their health history. Do not support irresponsible breeding practices. You are better off purchasing your dog from a shelter or rescue center rather than giving money to those who breed without regard for the dogs’ health. Veterinary care can be expensive due to the health problems of the breed. Berners molt a lot, especially in the spring and fall. If shedding drives you crazy, this may not be the right breed for you. Berners like to be with family. They are likely to develop nuisance behavior problems, such as barking, digging or chewing, if isolated from people and their activities. When Berners are mature, they are large dogs that like to have a job to do. For these reasons, it is advisable – and fun – to begin obedience training at an early age. Although they are very docile with children, Berners sometimes accidentally run over a toddler or young child. To get a healthy dog, never buy a puppy from an irresponsible breeder, puppy mill or pet store.

An ancient breed, the Molossian, stands out as one of the most versatile, traveled, and influential in the development of a variety of Mastiff-type dogs, including Berners. The four Swiss Sennenhund breeds (Appenzeller Sennenhund, Entlebucher Sennenhund, Greater Swiss Mountain Dog, and Berner Sennenhund) are believed to have developed as crosses between Swiss Alpine farm dogs and the Molosser or Mastiff type dogs that the Romans brought with them when they they made. invaded the Alps in the 1st century BC. The Berners have likely been working on Swiss farms for more than 2000 years, hiding out on small estates in the Alps, where they have been pulling carts, accompanying cattle, guarding, and providing owners with loyal company. It is known that in 1888, only 36 percent of the Swiss population worked in agriculture, and the need diminished for a strong dog that could herd cattle and pull a cart full of goods. In 1899, however, the Swiss became interested in preserving their native breeds and founded a dog club called Bern. Members included breeders of a variety of purebred dogs. In 1902, the Swiss dog club sponsored a show in Ostermundigen that drew attention to the Swiss mountain breeds. Two years later, the breeds took a big step forward through various events: at an international dog show in Bern, the Swiss dog club sponsored a class for Swiss “shepherd dogs”, which included mountain dogs. This was also the first year these dogs were referred to as “Bernese”. And in that same year, the Swiss Kennel Club recognized the Bernese Mountain Dog as a breed. During the First World War, dog shows and breeding took a back seat to war efforts. But after the war, the first Bernese Mountain Dogs were exported, first to the Netherlands and then to the United States, although the breed was not yet recognized by the American Kennel Club. In 1936, two British breeders began importing Berner and Berner’s first litter of puppies was born in England. Also in 1936, the Glen Shadow kennel in Louisiana imported a female Berner and a male Berner from Switzerland. In early 1937, the AKC sent Glen Shadow a letter saying that the Bernese Mountain Dog had been accepted as a new breed in the working class. World War II again interrupted the breed’s progress outside its homeland, but after 1945, importation and registration resumed in the United States. In 1968, the Bernese Mountain Dog Club of America was founded, with 62 members and 43 registered Berners. Three years later, there were more than 100 members in the club. Meanwhile, the breed, which had disappeared in England during World War II, was reintroduced to Britain. The Bernese Mountain Dog Club of America became a member of the AKC in 1981. In 1990, the AKC adopted its current Bernese Mountain Dog standard.

When size matters, the largest animals in the world