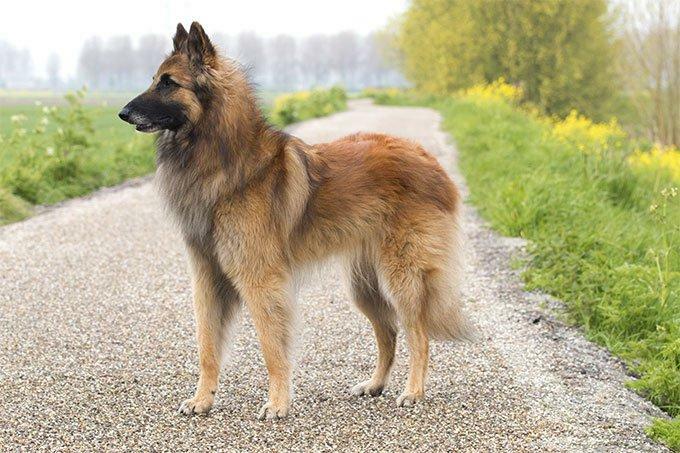 Created in Belgium in the late 19th century, the Belgian Tervuren breed of dog is often considered the most elegant of the four Belgian Sheepdogs. They are intelligent and athletic, making them versatile in any activity, including their original job, herding. Although they are purebred dogs, you may find them in the care of shelters or rescue groups. Remember to adopt. Don’t go shopping if you want to take a dog home. Belgian Tervurens are intelligent and sensitive. They do best with plenty of mental and physical stimulation; otherwise, they may invent their own potentially destructive ways to relieve boredom. They also don’t take well to being left alone in the house for many hours a day. If you can provide a dog with plenty of exercise, training, and attention, this breed may be a good choice for you.

Shyness can be a problem in this breed. Choose the intermediate puppy, not the one that beats up littermates or hides in a corner. Belgian Tervuren need at least one hour of exercise a day. If you don’t provide them with exercise and mental stimulation in the form of training or play, they will find their own entertainment, and it will most likely be expensive to repair. Belgian Tervuren shed year-round and require 15 to 20 minutes of weekly grooming. Tervuren can get along well with other dogs and cats if raised with them, but they have a chasing instinct and will go after animals that run away from them. The Belgian Tervuren will chase joggers, cyclists and cars, so it needs a well fenced yard. The Tervuren is very intelligent and alert. They also have a strong herding and protective instinct. Although they are good sized dogs, they are very people oriented and want to participate in family activities. The Belgian Tervuren is play-oriented and sensitive. Training sessions should be fun, consistent and positive. Because of their intelligence, high energy and other characteristics, Tervuren are not recommended for inexperienced dog owners. To get a healthy dog, never buy a puppy from an irresponsible breeder, puppy mill or pet store. Look for a reputable breeder who tests their breeding dogs to make sure they are free of genetic diseases that can be passed on to puppies and that they have a sound temperament.

The Belgian Tervuren is one of four varieties of sheepdogs that were developed in Belgium in the late 19th century. The four varieties are Malinois (fawn-mahogany, short coat with black mask), Tervuren (fawn-mahogany, long coat with black mask), Laekenois (fawn, rough coat) and Groenendael (black, long coat). The American Kennel Club (AKC) recognizes all but the Laekenois as separate breeds in the US, while the United Kennel Club recognizes all four types as one. The Club du Chien de Berger Belge (Belgian Shepherd Dog Club) was formed in September 1891 to determine which of the many different types of dogs was uniquely representative of sheepdogs developed in Belgium. In November of that same year, breeders and fanciers met on the outskirts of Brussels to examine sheepdogs from that area. After much deliberation, veterinary professor Adolphe Reul and a panel of judges concluded that the native sheepdogs of that province were square, medium-sized dogs with well-set triangular ears and very dark brown eyes that only differed in the texture, color and length of the hair. Subsequent examinations of dogs in other Belgian provinces yielded similar results. In 1892, Professor Reul wrote the first Belgian Sheepdog Standard, which recognized three varieties: dogs with long coats, dogs with short coats, and dogs with rough coats. That same year, the first Belgian Shepherd Dog Show was held in Cureghem, Belgium, and the winner was a Tervuren named Duc II. The Club du Chien de Berger Belge applied to the Societe Royale Saint-Hubert (the Belgian equivalent of the American Kennel Club) for breed status, but was denied. In 1901, however, the Belgian Shepherd, encompassing all four varieties, was finally recognized as a breed. The breeders decided to give each of the different varieties of Belgian Sheepdogs their own names. Tervuren takes its name from a Belgian town that was the home of M. F. Corbeel, who raised Tom and Poes, beige dogs that are considered the foundation of the Tervuren breed. Belgian Shepherds were also used as watchdogs and draft dogs. They were the first dogs used by the Belgian police. Before World War II, international police dog trials became very popular in Europe, and Belgian dogs won various awards in trials. When World War I broke out, the military used many Belgian sheepdogs for a number of jobs, including messenger dogs, Red Cross dogs, ambulance dogs, and, according to some, light machine gun wagon dogs. Some Tervurens made it to the United States, but the breed did not catch on and had disappeared in this country in the 1930s. It was not until 1953 that more Tervurens were imported for American breeding programs. In 1959, the AKC declared them a separate breed from the other Belgian Sheepdogs, and the Belgian American Tervuren Club was formed in 1960. Since then, the Terv’s elegance has made it a popular show dog and its working ability has made it has become a talented sheepdog. It is ranked 107 among the 155 breeds and varieties recognized by the American Kennel Club.