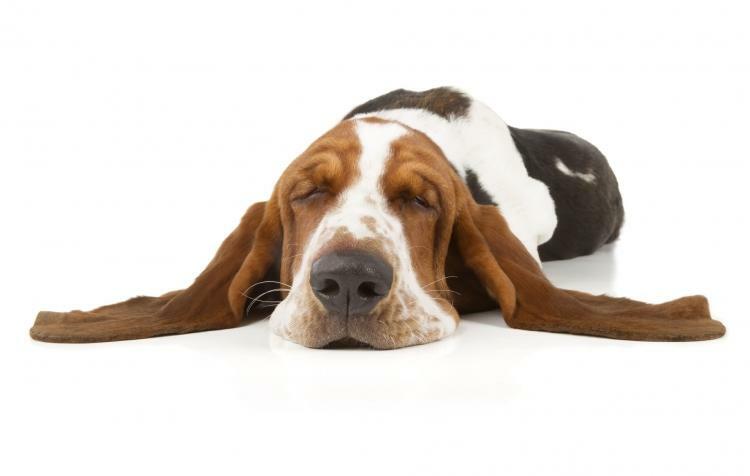 The Basset Hound dog breed was bred for small game, such as rabbits, and is still used for this purpose in some parts of the United States. When not on the trail of a rabbit, they are very calm family friends who love children. Although they are purebred dogs, you may find Bassets in shelters or in the care of rescue groups. If this is your breed, opt for adoption if possible. Adaptable, affectionate and relaxed, these dogs appeal to even novice dog parents. However, you will need to commit to moderate exercise and feeding your puppy a proper diet, as their laid-back behavior could lead to weight gain and the health problems that come with it. If you can keep your Basset active, despite how much he may protest, you will have a loving companion that will stick around for many years to come. AniMall24 recommends a good dog bed to give your medium-sized Basset Hound a good night’s sleep. You should also buy a squeaky rope toy to help keep your low-energy pup active.

Like all hounds, Bassets can be stubborn and difficult to train and housebreak. Crate training is recommended. If they pick up an interesting scent, Basset Hounds may try to follow it, regardless of the danger it poses to them. Keep your Basset on a leash when outdoors and not in a fenced yard. Also, take him to obedience classes and make sure he responds well to the come command. Use gentleness and patience to train him. Hounds of all types tend to think for themselves and do not respond well to harsh training techniques. One of the main reasons Basset Hounds are surrendered to rescue or adoption is that they “drool too much”. “Because of the loose fur around their mouths, they also tend to foul quite a bit when they drink. If you are a picky housewife who can’t stand drool, a Basset Hound is not the best choice for you. Basset Hounds are often flatulent. If this problem seems excessive, talk to your veterinarian. A change in diet may help. Obesity is a real problem for Basset Hounds. They love to eat and will overeat if they get the chance. If they put on too much weight, they can start to have joint and back problems. Portion food according to the condition of your Basset, not according to the recommendation on the bag or can. Since Basset Hounds are prone to bloat (a potentially fatal disease), it is better to give them two or three small meals a day rather than one large meal a day. Do not allow your Basset to exercise too strenuously after eating, and watch him for an hour after eating to make sure he is well. Your Basset’s long ears should be checked and cleaned every week to help prevent ear infections. You may need to wash the ears more frequently, as they can crawl in puddles and pick up dirt as they drag on the ground. Basset Hounds may howl loudly, especially if left for long periods of time. Although your Basset Hound is strong and surprisingly agile for such short legs, it is best to discourage him from jumping out of, for example, a car. Pick him up and support his back so he doesn’t hurt himself. Basset puppies can suffer from joint problems as they grow older. Make sure your puppy does not overdo it when playing and discourage him from jumping off furniture. With two-thirds of their body weight on the front of their bodies, Basset Hounds are not great swimmers. Do not allow your Basset Hound to fall into a pool because it can quickly get into trouble. To get a healthy dog, never buy a puppy from a backyard breeder, puppy mill or pet shop. Look for a reputable breeder who tests their breeding dogs to make sure they are free of genetic diseases that can be passed on to puppies and that they have a sound temperament.

Trust the French to develop such a distinctive breed, with its “jolie” appearance, jolie meaning pretty-featured, or unconventional attractiveness. The name Basset means “short” and in France refers to a different level of hound because of its height. Bassets are probably descended from the St. Hubert’s Hound, the ancestor of today’s Bloodhound, and arose when a mutation in the St. Hubert’s strain produced a short-legged or dwarf hound. Perhaps the dwarf hounds were kept as curiosities and later bred on purpose when their ability to track rabbits and hares under brush in thick woods was noted. The first recorded mention of a Basset Hound appears in an illustrated book on hunting, La Venerie, written by Jacques du Fouilloux in 1585. From the illustrations it appears that the first French Basset Hounds resembled today’s Basset Artésien Normand, a breed of dog known today in France. Basset Hounds were first popular with the French aristocracy, but after the French Revolution they became the hunting dogs of commoners who needed a dog they could follow on foot, having no access to horses. In the middle of the 19th century they arrived in Great Britain. Lord Galway imported a pair to England in 1866 and they produced a litter of five puppies, but he did not show them, so they remained relatively unknown. Then, in 1874, Sir Everett Millais imported a Basset Hound named Model from France. Millais promoted the breed in England and began a breeding program in his own kennel, as well as in cooperation with the breeding programs established by Lord Onslow and George Krehl. For his efforts to publicize the Basset Hound in England, Millais is considered the “father of the breed” in England. He first exhibited a Basset at an English dog show in 1875, but it was not until he helped form a large entry for the Wolverhampton show in 1880 that the public began to take notice of the breed. A few years later, the breed became even more popular when Alexandra, Princess of Wales, had Basset Hounds in the royal kennel. In 1882, the Kennel Club of England accepted the breed, and in 1884 the English Basset Hound Club was formed. Although the Basset probably came to the United States in colonial times, the breed did not gain a foothold in this country until the early 20th century. The American Kennel Club (AKC) began registering Basset Hounds in 1885, the first being a dog named Bouncer, but it was not until 1916 that the AKC formally recognized the breed. The year 1928 was a turning point for the Basset Hound in the United States. That year, Time magazine featured a Basset Hound on the cover and an article about the 52nd annual Westminster Kennel Club dog show at Madison Square Garden, written as if through the eyes of a Basset Hound puppy. The charm of the Basset Hound was discovered and, from that moment on, its popularity began to grow. Bassets entered pop culture in a big way in the 1960s with their appearance in the advertising campaign for Hush Puppy shoes and the debut of the Fred Basset comic strip, which continues to this day. The Basset Hound currently ranks 28th among the 155 breeds and varieties registered by the AKC, attesting to its enduring popularity. Across the United States, Basset Hounds celebrate their love for the breed in ways as unique as the appearance of their dogs. Basset Hound picnics and walks are traditions in many regions, sometimes attracting thousands of Bassets and their families. Some of these events even crown the king and queen of the Basset Hounds. Most feature fun competitions such as contests to determine which Basset has the best “butt wadding.” “At these events there is usually a wide variety of Basset Hound souvenirs, which are often sold to raise funds for Basset Hound rescue organizations.

Things to Know Before Adopting a Puppy