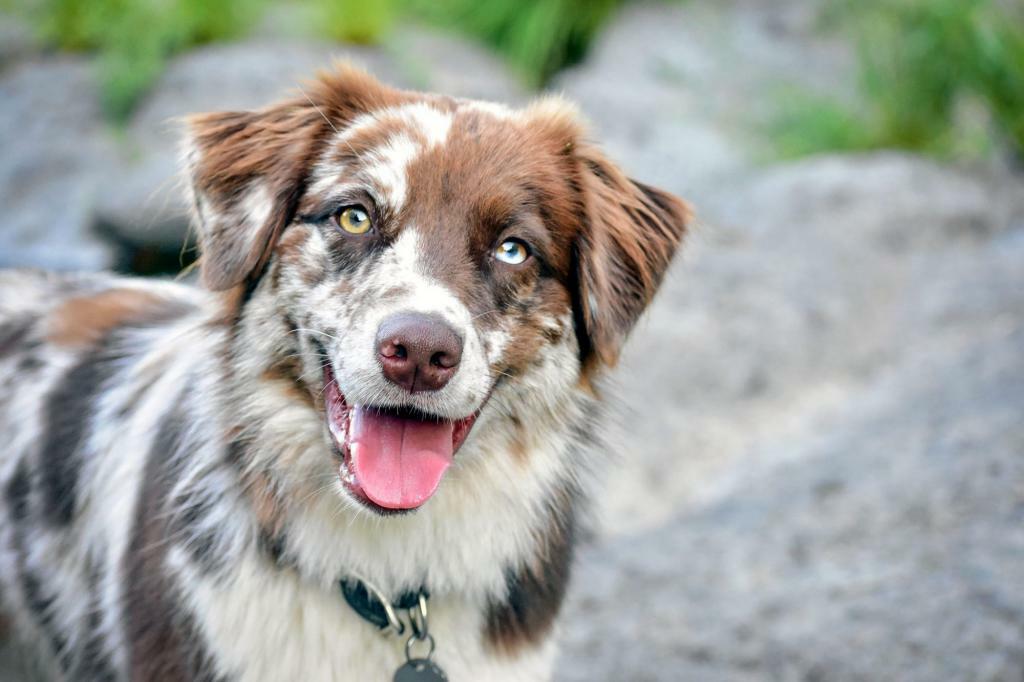 Despite its name, the Australian sheepdog breed originated in the western United States, not Australia, at the time of the gold rush in the 1840s. Originally bred to herd livestock, it is still a working dog. You can find these dogs in shelters and rescues, so opt to adopt them if you can. Aussies, as they are nicknamed, are happiest when they have a job to do. They can be wonderful family companions if their intelligence and energy are channeled into sports or canine activities. Any type of dog can develop arthritis or slow down with age. AniMall24 recommends giving your dog Glyde Mobility Chews to keep their joints healthy.

Australian Shepherds need approximately 30 to 60 minutes of exercise per day, preferably with high-energy activities such as playing frisbee. They also need a job to do, such as daily obedience training or competing in herding and agility trials. Australian Shepherds can be very destructive and bark for a long time if they do not get the exercise and mental stimulation they need. Aussies will bark to warn if they see or hear anything suspicious, and will protect their family and home with surprising ferocity. Although Australian Shepherds have a reputation for needing wide-open spaces, they do well in cities if given sufficient stimulation and exercise. However, they do not make good flat dogs. At least a small yard is necessary to help them release some of their high energy. This herding dog’s overbearance with livestock can carry over into the home and, with a shy or inexperienced owner, can assume the dominant role in the family. This breed needs a firm, confident owner; Aussies are probably not a good choice if you have never owned a dog. Australian Shepherds have a medium moult, and their coat requires regular maintenance, including weekly brushing to keep it clean and prevent matting, and possibly trimming to maintain its neat appearance. Aussies enjoy the company of their family and prefer to stay close to their human pack. They do not do well being left alone in the backyard for long periods of time. Aussies are by nature aloof with people they do not know, and unless they are regularly exposed to many different people – ideally from puppyhood – they may be fearful of strangers. This can lead to biting out of fear and aggression. Give your Aussie plenty of contact with friends, family, neighbours and even strangers to help him hone his social skills. To get a healthy dog, never buy a puppy from an irresponsible breeder, puppy mill or pet shop. Look for a reputable breeder who tests their breeding dogs to make sure they have no genetic diseases that can be passed on to the puppies and that they have a healthy temperament.

Despite its name, it is a breed born in the United States. The Australian Shepherd was originally developed to herd the livestock of ranchers and farmers in the West of USA, and some current Aussies continue to perform that work. There are many theories about what breeds were used to create the Australian Shepherd. It is likely that the Aussie’s ancestors include collie and shepherd type dogs that were imported with shipments of sheep from Australia during the 1840s, hence the name. Breeders strived to improve their herding ability and create a versatile, hard-working, intelligent dog. The breed enjoyed a boom in popularity in the years following World War II that went hand in hand with a renewed interest in Western-style riding. Crowds at rodeos or horse shows, as well as viewers of western movies or television shows, were impressed by the athletic dogs they saw working alongside the cowboys. Despite popular interest, the breed was not recognized by the American Kennel Club until 1993. Today, the Australian Shepherd is still the same flashy, energetic, intelligent dog that proved so useful to ranchers and farmers of the old West. It is loved by many and enjoys its life as a family companion, protector, and herding dog.