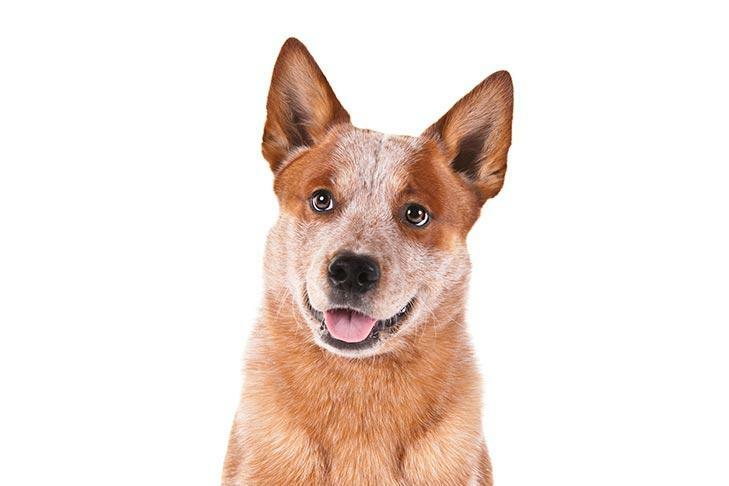 The Australian Cattle Dog is an extremely intelligent, active, and robust breed of dog. Developed by Australian settlers to manage the herds of cattle on the extensive ranches, it is still used today as a herding dog. They love to have a job to do and be part of all family activities. Although they are purebred dogs, you may find them in the care of shelters or rescue groups. Remember to adopt. Don’t buy if you want to take a dog home. Australian Sheepdogs are loyal and protective of their families, although they are wary of strangers. In addition to herding work, they do well in dog sports, such as agility, obedience, rally, flyball and flying disc competitions. Novice pet parents and apartment dwellers beware; these dogs need lots – lots! – of mental and physical activity to keep them happy and healthy, and to avoid dull, destructive behavior. If you have a home with plenty of room to run and can keep up with such an active puppy, this may be the breed for you.

The Australian Cattle Dog is extremely active, both physically and mentally. He needs regular work or activity to keep him busy, tired and out of trouble. Chewing and biting is the natural instinct of the Australian Cattle Dog. Proper training, socialisation and supervision help to minimise this potentially dangerous trait. The Australian Cattle Dog is a “shadow” dog; intensely devoted to its owner, it does not want to be separated from him. The best way to help the Australian Cattle Dog get along with children and other pets is to raise him with them from an early age. To get a healthy dog, never buy a puppy from an irresponsible breeder, puppy mill or pet shop. Look for a reputable breeder who tests their breeding dogs to make sure they are free of genetic diseases that can be passed on to puppies and that they have a sound temperament.

The Australian Cattle Dog was bred by 19th century Australian settlers to herd cattle on large ranches. This breed was instrumental in helping ranchers expand the Australian beef industry by quietly but aggressively herding cattle, sometimes uncontrollably and almost feral, with nips and bites. Today’s Australian Cattle Dog is the result of many crosses. Cattlemen were looking for a hardy dog that could withstand the harsh climate and working conditions of Australia. The dogs that were initially brought from England were not up to the task, so they were crossed with the native Dingo. Countless crosses made by different breeders resulted in what are believed to be the ancestors of today’s Australian Sheepdog. The blue-colored dogs proved to be the most popular with ranchers and ranch owners, and became known as Blue Heelers. They were especially popular on Queensland cattle farms, where they were given the name Queensland Heelers or Queensland Blue Heelers. In 1893, Robert Kaleski took up the breeding of Blue Heelers, and began showing them in 1897. Kaleski developed a standard, basing the Cattle Dog on the Dingo, believing that this was the type naturally suited to the Australian outback. (The current Australian Cattle Dog closely resembles the Dingo, except for the color.) ) The Kennel Club of New South Wales approved this standard in 1903. The breed first became known as Australian Heeler, and later as Australian Cattle Dog, which is the name now accepted as official throughout Australia and elsewhere. However, some people still call them Blue Heelers or Queensland Heelers. After a period in the Miscellaneous Class, the Australian Cattle Dog was accepted for registration by the American Kennel Club in May 1980. It became eligible for show in the Working Group from September 1980. The breed was transferred to the Herding Group in January 1983.