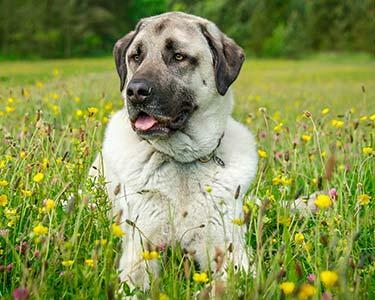 The Anatolian sheepdog originated in Turkey, where it was bred as a shepherd’s companion and livestock guardian. They were created with specific traits to resemble the size and color of the livestock they defended, so that predators would not detect them among the herd. Sometimes referred to as the Anatolian Karabash Dog or Kangal (which many kennel clubs consider a separate breed), they are a fiercely loyal guard dog and a large, impressive breed of dog, typically weighing between 120 and 150 pounds at maturity. Novice pet parents should beware. Dogs of this breed are not only large, but are also known for their stubbornness. Anatolian Shepherds require firm, steady trainers with experience in handling dogs. In addition, you must be prepared to clean up all the hair they shed throughout the year. A trained and well-socialized Anatolian Shepherd is a friend and guardian of anyone they consider their “flock,” which includes their human family members. They are even friendly with their human children, although their size makes it easy for them to knock a child over during vigorous play. They may also chase other pets or animals if their humans do not train them properly. Therefore, socialization and behavioral training should begin early, ideally in the puppy stage. If you are willing to stand firm with training, have the strength to handle a large dog and are willing to put in the time and dedication, an Anatolian Shepherd will be your friend and guardian for life.

It is essential that the Anatolian Shepherd receives proper socialisation and training so that it can learn what is normal and what is threatening. Untrained and unsocialised Anatolian Shepherds can become overprotective, aggressive and uncontrollable. Anatolian herders are independent and less eager to please than other breeds. They do not necessarily wait for instructions, but will act if they believe their “flock” is threatened. Secure fencing is an absolute necessity. Some Anatolians are champions of digging. As guardians of their territory, some may be barkers, especially at night. Some anatolians can be aggressive towards dogs. They show a lot of hair, especially in spring. The Anatolian Shepherd can be a challenge to leadership at times. Owners must be willing to exercise pack authority in a consistent and gentle manner. Because of their large size, housing, medication and feeding costs are high; in addition, you will need a large vehicle for them. Anatolian Shepherds are sensitive to anaesthesia. Discuss this with your veterinarian before any surgical procedure. To get a healthy dog, never buy a puppy from an irresponsible breeder, puppy mill or pet shop. Look for a good shelter or rescue that vaccinates, provides veterinary care and requires applicants to meet the dogs beforehand to make sure they are compatible.

The Anatolian Sheepdog breed is named after its homeland, Anatolia, in central Turkey, where it remains a source of pride (and has even been honored on a national postage stamp). The breed’s hard-working ancestors are believed to date back 6,000 years. Wandering tribes from Central Asia probably brought the first mastiff-type dogs to the area that is now Turkey, and sight hound breeds from the southern regions contributed to the agility, long legs and aloofness of the Anatolian. Due to the climate and terrain of the area, the local population developed a nomadic way of life, dependent on herds of sheep and goats. The protection of these herds, and of the shepherds themselves, was the task of the large dogs that traveled with them. The dogs became known as coban kopegi, Turkish for “shepherd dog.” “The dogs stayed with the animals day and night, and had to be agile enough to move quickly from one end of a widely scattered herd to the other. They also had to be big and strong enough to stand up to predators. Severe selection and breeding only the best workers resulted in a dog with uniform type, a stable temperament and excellent working ability. The dogs were not usually fed once they were past puppyhood. They lived by killing moles and other small animals, though without hurting the herd. They wore iron collars with long spikes to protect their throats from assailants. Working dogs with these collars can still be found today in Turkey. Anatolian herders were introduced more enthusiastically in the U.S. in the 1970s, although earlier the Turkish government had given Anatolians to the U.S. Department of Agriculture for experimental work as herd guards. But in 1970 the Anatolian Shepherd Dog Club of America was formed at the urging of Robert Ballard, a U.S. Navy officer who had become fascinated by the dogs during his time in Turkey and began breeding them once back in California. The breed entered the American Kennel Club’s Miscellaneous Class in 1996. It moved to the Working Group in August 1998.