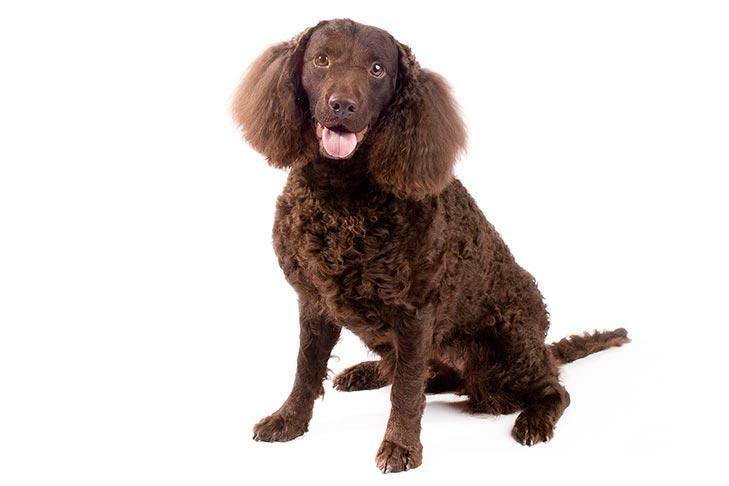 The American Water Spaniel was bred to be an all-around hunting dog. Specializing in waterfowl, these skilled swimmers gladly retrieve from small boats, protected by their waterproof double coat. This breed has the high energy of a dog born to chase and retrieve game, but given enough exercise, can also be a great family companion. If you can keep up the pace and provide plenty of room to run, then this may be the breed for you! AniMall24 recommends a good dog bed to give your medium sized American Water Spaniel a good night’s sleep. You should also pick up a dog toy to help burn off your pup’s high energy.

American Water Spaniels are active dogs and require daily exercise. Give them one to two hours a day of walks, runs or fetch games. You can spread the exercise periods throughout the day: an hour here, half an hour there. Without it, they may express pent-up energy with recreational barking and excessive chewing. The AWS craves companionship, and if left alone for more than a few hours, may express boredom and loneliness in destructive ways. The AWS is best suited for homes where someone is home during the day. The American Water Spaniel can be stubborn and manipulative. You have to show them that you mean what you say by setting rules and being consistent in enforcing them. American Water Spaniels like to roam and may leave your yard or your side to go hunting on their own if they are not confined by a fence or restricted by a leash. AWS can become one-person dogs, but will be friendly with family members. However, don’t expect them to adore visitors or strangers. Rough handling can make your AWS shy or stubborn. This breed responds best to a gentle touch and training techniques that use rewards for doing well, rather than punishment for doing poorly. Some American Water Spaniels are territorial and aggressive with strange dogs, although they get along well with other family dogs and pets. They have a natural tendency to bite, dig and jump, but these behaviors can be overcome with training. To get a healthy dog, never buy a puppy from an irresponsible breeder, puppy mill or pet store. Look for a reputable breeder who tests their breeding dogs to make sure they have no genetic diseases that can be passed on to the puppies and that they have a healthy temperament.

The American Water Spaniel developed in the Fox and Wolf River valleys of Wisconsin in the mid-19th century. Reliable breeding records date back to 1865. Ancestors of the AWS probably include the Irish Water Spaniel, the Curly-Coated Retriever, the Field Spaniel and the now extinct Old English Water Spaniel. Whatever its family origins, the AWS we know today was bred to be a versatile hunting companion. Its dense, curly coat helps protect this natural swimmer from cold water as well as brambles in the woods; its small size allows waterfowl hunters to carry it in a small boat or canoe; and it will tenderly retrieve grouse, quail, pheasants and ducks. The AWS stays close to its hunting partner rather than moving away. Hunters along the Mississippi Flyway and its northern tributaries used to use the versatile AWS, taking advantage of the dog’s ability to work in varied terrain, from swamps to uplands, its endurance and its ability to retrieve many birds in a day. But when larger breeds of retrieving dogs from England became popular, the little brown spaniel began to fall out of favor. Fortunately, it had an admirer in Dr. F. J. Pfeifer of New London, Wisconsin, who is credited with saving the breed from extinction. Pfeifer bred and sold American Water Spaniels, formed a breed club and helped develop a breed standard, a written description of what the AWS should look like. His efforts paved the way for breed recognition by the United Kennel Club in 1920, the Field Stud Book in 1938 and breed recognition by the American Kennel Club in 1940. One of Pfeifer’s dogs, “Curly Pfeifer,” was the first registered American Water Spaniel. The American Water Spaniel remains a rare breed, with fewer than 3,000 specimens today. This rarity has probably saved the breed from splitting into two groups, one used for dog competitions, and the other to continue the breed’s traditional work as a hunting companion, as seen in some other retriever breeds. It was named Wisconsin state dog in 1986.