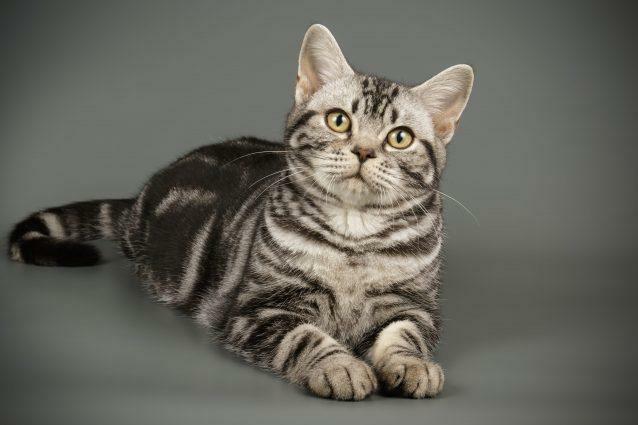 The American Shorthair, also called American shorthair, is a breed of cat originating in the United States, the “noble” equivalent of the common American half-breed. With the advent of artificial selection in the early 1900s, American breeders wanted to define a cat that represented the typical American mouse hunter, no less than what Europeans did with the European and the British with the British Shorthair.

The American Shorthair, also called American shorthair, is a breed of cat originating in the United States, the “noble” equivalent of the common American half-breed. With the advent of artificial selection in the early 1900s, American breeders wanted to define a cat that represented the typical American mouse hunter, no less than what Europeans did with the European and the British with the British Shorthair.

Date and place of origin

Medium-sized, muscular and athletic cat. The head is round, the nose has a slight interruption at the level of the eyes, round and well spaced, with colors consistent with the coat, the cheekbones are evident but without excess. The ears are broad at the base and rounded, the coat is short, thick and hard, suitable for protecting the cat from seasonal variations.

Crosses with other breeds

The American shorthair was first registered in the CFA in 1906 under the name of Domestic Shorthair . The idea was to select a cat that would represent the typical American cat , heir to those first cats imported by European settlers and then spread across the continent to keep mice and other rodents at bay. The American Shorthair we see today, therefore, is descended from those early cats even though the selective directions imposed by the standard have transformed it into a cat with a peculiar appearance.

The breed was later renamed the American Shorthair in 1966 to better nationalize it and distinguish it from other shorthair breeds.

In TICA, contrary to the CFA and the WCF, the American Shorthair shares the standard with the American Wirehair from which it is distinguished only by the hair which is short and dense in the first and curled in the second.

The American Shorthair is a strong and sturdy cat , which somehow remembers the cats that “worked” on American farms and properties. It is a medium-large cat , balanced in proportions even if slightly rectangular, muscular, with well developed shoulders. The tail has a medium length, broad at the base. The head is broad, with prominent cheekbones and a sweet and open general expression. The ears are of medium size, slightly rounded, placed at a distance equal to that which separates the eyes. The eyes are wide and wide, the almond-shaped upper part and the rounded lower part, set well apart, the expression is attentive.

Any traces of chocolate, sand, lavender, lilac or colorpoint are considered defects.

The CFA standard is very keen to emphasize that the appearance of the American Shorthair must be reminiscent of a strong and sturdy cat, able to “work”. The expected temperament is then that of a sociable, curious cat, little prone to shyness , interested in exploration and able to feel good even alone.

It is a rather athletic and muscular cat , who loves hunting games and competing in an architecturally complex environment but, at the same time, does not disdain the company of his family to which he dedicates himself with presence and constancy.

If properly integrated can live with other cats and other animals and may establish with the children of the relationship made of complicity and sharing of spaces and games.

The coat of the American Shorthair does not present particular management difficulties, although during the moult it tends to renew itself and, therefore, to thin out a lot. Consequently and especially in the spring and autumn seasons, it is worth brushing it often , also to avoid accumulation of hair in the stomach. They are quite clean and do not need bathrooms.

They may require some cleaning of the teeth , nasal and ocular secretions.

From a health point of view , the breed has shown a certain predisposition to the development of hip dysplasia and hypertrophic cardiomyopathy.

The American Shorthair is a fairly mild cat , even if, given the still recent selection, it is not surprising a certain variability of the temperament within the breed.

Generally speaking, it is a cat that loves to explore and hunt and therefore an environment that hosts it must be able to guarantee it the possibility of doing these activities, which are also characteristic of the feline ethogram.

The spaces must be designed to accommodate his desire to climb, jump, scratch and opportunities for running and predation games must be offered if the cat does not have the possibility of accessing the external environment.

His sociality is expressed through a certain participation in family life, so it will be important to know how to integrate him in the correct way, without exceeding with manipulations and effusions but at the same time allowing him to feel part of a system in which his needs also count.

Like his cousin Wirehair , he is an affectionate cat but also tolerates loneliness well , especially if it is then compensated for by some time spent together.