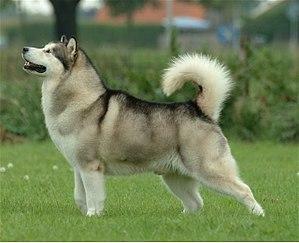 The Alaskan Malamute has a powerful and robust body, built for endurance and strength. It is one of the oldest dog breeds whose original appearance has not been significantly altered. This intelligent canine needs constant work and leadership to keep it from becoming bored or challenging to handle. New pet parents, beware. Dogs of this breed are sensitive and need lots of companionship and open space. They don’t adapt well to apartment living, and they are certainly shedders and need a lot of grooming to keep their coats healthy. The dog’s coat needs to be cleaned year round, and especially during the shedding season. Alaskan Malamutes are very energetic dogs and therefore require vigorous exercise. If you plan to leave them at home while you are at work, you may see anxious and destructive behavior. A dog walker or pet sitter during the day is practically a necessity if you can’t be at home, yourself. An Alaskan Malamute will do well with an experienced parent, plenty of open space to roam and burn off energy, and a cooler climate. If you can meet this breed’s needs, you will have an intelligent, highly trainable, and loving companion for life.

Not recommended for the first time dog owner, as their intelligence combined with stubbornness can make them a challenge for someone who does not know dog behaviour. Malamutes vie for the first position in the household. Everyone living with the dog must be able to deal with this properly and make it clear that all members of the family must not allow themselves to be pushed around. Alaskan Malamutes are notorious diggers. Any fencing should be buried so that they cannot dig out of their yard. Alaskan Malamutes are powerful, independent dogs that, if not properly trained or exercised, can become destructive or bored. With early socialisation and training, Malamutes can learn to get along with other dogs and indoor cats. They will see outdoor cats and other small animals as easy prey. Their strong prey instinct may cause a malamute to stalk and kill small animals, such as birds, squirrels, cats and even small dogs. Proper socialisation and introduction to other companion animals is necessary. Alaskan Malamutes shed a lot twice a year. Their thick double coat is not suitable for warm climates. Generally a quiet breed, Malamutes rarely bark. They do carry on conversations with you, expressing themselves vocally with “woo woo” sounds or loud, extended howls. To get a healthy dog, never buy a puppy from an irresponsible breeder, puppy mill or pet shop. Look for a shelter or rescue that provides medical care and vaccinations for their dogs. Meet the dog you are interested in before you adopt it to play with it and make sure you like its personality.

One of the oldest sled dogs in the Arctic, the Alaskan Malamute’s ancestors crossed the land bridge from Siberia to Alaska with native peoples thousands of years ago. A tribe, known as the Mahlemuts, settled in the northeastern part of the Seward Peninsula and the Alaskan Malamute developed there. The dogs were used to hunt seals, chase away polar bears and pull heavy sleds loaded with food or camp supplies. The natives treated their dogs well and valued them highly. The gold rush of 1896 brought to Alaska a large influx of dogs of many sizes and breeds that could survive the climate. Many native dogs interbred with these dogs and the pure type was lost. The Mahlemuts were a relatively isolated tribe, so the Alaskan Malamute survived the incursion better than other breeds. Arthur T. Walden established his Chinook kennel in New Hampshire and began breeding Alaskan Malamutes. He and his successors, Milton and Eva Seeley, supplied many dogs for Byrd’s Antarctic expeditions in the 1930s. The Seeleys initiated a program to breed the dogs found in the Norton Sound area of Alaska. This strain of Alaskan Malamutes became known as the “Kotzebue” strain. A slightly different strain was developed by Paul Voelker, Sr. with dogs he purchased in Alaska in the early 1900s and later in the 1920s. This strain was known as the “M’Loot” strain. Some of these dogs were used in World War I and II and by Admiral Byrd’s second expedition. The Alaskan Malamute Club of America was formed in 1935 and the American Kennel Club recognized the breed that same year. During World War II, most of the registered Alaskan Malamutes were loaned for the war because there was a great demand for sled dogs. Tragically, many of them were destroyed after serving their nation on an expedition to Antarctica during World War II. All Malamutes registered by the AKC today can trace their ancestry back to the original Kotzebues or to dogs registered during the open period in the late 1940s.