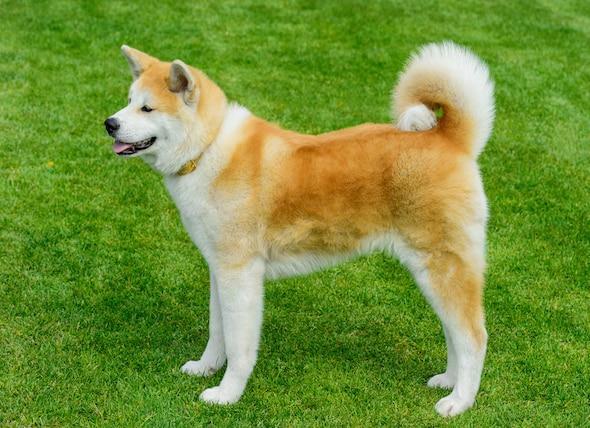 The Akita is a large and powerful dog breed with a noble and intimidating presence. They were originally used to guard royalty and nobility in feudal Japan. These dogs also tracked and hunted wild boar, black bear and sometimes deer. The Akita does not back down from challenges and is not easily frightened. Consequently, they are fearless and loyal guardians of their families. However, they are also loving, respectful and fun dogs when properly trained and socialized. An Akita is bound to shed quite a bit, and you may have to wipe some drool off your face if you bring one home. Certainly, owners should be prepared for the cleanup. They also tend to be stubborn and don’t like strangers too much. While these may be good traits for a guard dog, they will need an experienced trainer if they are going to interact with other animals or people. Novices should be cautious. That said, dogs of this breed are loyal companions who will attach to the right human for life and shower them with adoration and love. So, if you and your family are up for the challenge and consider adopting an Akita, you will have a lifelong friend that will not let you down.

To get a healthy pet, never buy a puppy from an irresponsible breeder, puppy mill, or pet store. Look for a rescue center or shelter that vaccinates, provides veterinary care, and requires applicants to meet the dogs to make sure they are a good fit with their potential forever family. Akitas can be aggressive with other dogs and are especially prone to same-sex aggression. They will need socialization training to overcome these tendencies. The Akita is not a good choice for first time dog owners. Positive socialization and consistent, firm training are essential for the Akita. If mistreated or mistreated, they often respond by becoming aggressive. The Akita will chase other pets in the house if not properly trained. Prolonged eye contact is considered a challenge by the Akita, and it may respond aggressively. Training a willful Akita can be challenging and requires understanding, experience and patience. It is best to work with a trainer familiar with the breed, but be sure to participate in the training.

The Akita gets its name from the Akita province in northern Japan, where it is believed to have originated. The Akita’s known existence dates back to the 1600s, when the breed guarded Japanese royalty and was used to hunt fowl and big game (including bears). This courageous breed was introduced to the United States by a woman of no small stature: Helen Keller. The Japanese held Helen Keller in high esteem and brought her to Shibuyu to show her the statue of Hachiko, an Akita who achieved worldwide fame in the 1920s for his loyalty. Hachiko’s owner, a professor, returned from work every day at 3 p.m., and his devoted dog met him daily at the train station. When the professor died, loyal Hachiko continued his daily vigilance until his own death a decade later. When Helen Keller expressed a desire to have an Akita for herself, she was given a puppy, the first Akita brought to America. Keller was delighted with Kamikaze-go and was deeply saddened when he died of distemper at a young age. Upon hearing the news, the Japanese government officially gifted her with Kamikaze-go’s older brother, Kenzan-go. Keller later wrote that Kamikaze had been “an angel with fur” and that the Akita breed was “gentle, companionable and trusting.” “After World War II, American servicemen returning to Japan brought back more Akitas. Thomas Boyd is credited with producing the first Akita stallion to sire puppies in the United States, beginning in 1956. The American Akita eventually evolved into a more robust dog than the Japanese Akita and was valued by many for this reason. However, there were those who wanted to remain true to the Japanese standard. This division caused a decades-long battle that led to a delay in acceptance by the American Kennel Club. Finally, in 1972, the AKC accepted the Akita Club of America, but the division remains wide today and is a matter of great concern to Akita fanciers on both sides. What is never in dispute is the Akita’s historic and famous combination of fearlessness and loyalty. These traits were once put to the test at London Zoo, when a Sumatran tiger cub was orphaned. The zookeepers needed special help to raise the cub and chose an Akita cub for this important task. They knew the Akita would not be frightened and could engage in play that would help the tiger cub with the necessary life lessons. In addition, the Akita’s dense fur would protect it from sharp claws, and the cub’s inherent loyalty to its playmate would provide the desired companionship and protection for the bewildered orphan cub. The Akita performed this role successfully and “retired” from the job when the tiger reached adulthood. This is a truly fearless dog, totally self-confident and will show unwavering devotion to the family.

United States
We use cookies to ensure that we provide the best user experience and relevant ads that help us maintain our website. If you continue to browse our website your acceptance will be implicit. AniMall24 uses various services and technologies for data analysis, retargeting, and to provide you with personalized content and ads on AniMall24, as well as on third-party websites. You can find more information about how this information is used, including by third parties, in settings and in our Privacy policy. By clicking "Accept," you agree to these terms. You can decline the use of these services and technologies or update your preferences at any time. You can also revoke consent at any time by sending a Private Data Deletion Request to info@animall24.com.Accept