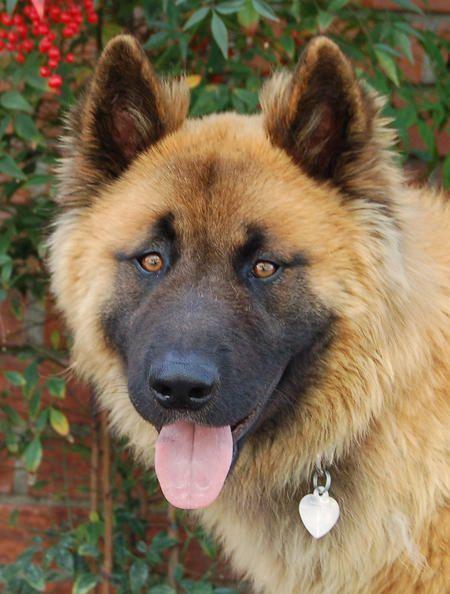 The Akita Shepherd is a mixed breed dog, a cross between the Akita and German Shepherd breeds. These puppies, stoic, loyal and hardworking, they have inherited some of the best traits of their parents. The Akita Shepherd is sometimes also called the Shepkita. Despite their unfortunate designer breed status, you can find these mixed breed dogs in breed-specific shelters and rescues, so remember to adopt. These adorable mixed-breed dogs are ideal for active city dwellers, although, being larger, they’re better suited for houses or homes with more space. They are calm but alert, which also makes them excellent watchdogs for singles and families alike. If you want a stoic and loyal dog, eager to please and alert to any potential dangers, the Akita Shepherd could be the right dog for you. AniMall24 recommends a good large, spacious crate to give your large Akita Shepherd a place to rest and relax. You should also get this dog brush and massager for your long haired puppy.

The Akita Shepherd is a mixed breed dog. They are not pure breeds like their Akita or German Shepherd parents. The main colours of Akita Shepherds are brindle, white, silver, red, grey, brown, sable and black. Sometimes their coat is solid and sometimes they have a mixture of colours. Akita Shepherds shed or “blow” their coats seasonally, which may mean they are not allergy friendly. However, they are relatively easy to care for. Regular weekly brushing, and daily brushing when their coat sheds, should be sufficient. Akita Shepherds have a medium energy level. Make sure your dog gets at least one good walk of half an hour to an hour a day, with some active play sessions and shorter walks. With proper introduction, an Akita Shepherd can be an amazing and calm companion for children. Always supervise play between children and dogs. If properly introduced, Akita Shepherds can become friendly with other dogs. They may have a prey drive with smaller animals, such as cats. Akita Shepherds are quite intelligent and stubborn, and may attempt to test the limits of their humans. They are also incredibly willing to please and thrive on constant training.

Although Akita Shepherds may have existed naturally over the years, it is believed that breeders began creating them sometime in the 1950s, after Akitas were brought to the United States from Japan. Breeders wanted to combine the stoic and protective nature of the Akita with the loyalty of the German Shepherd. Both breeds are intelligent, resulting in an intelligent, loyal and protective hybrid. They continued to create Akita Shepherds as the demand for the breed continued to increase. Akita Shepherds are still the most common in the United States. Although the Akita Shepherd breed began as a designer breed, some have ended up in shelters or in the care of rescue groups. Consider adoption if you decide this is the breed for you. Check local shelters, look for Akita Shepherd rescues, or check with breed-specific German Shepherd or Akita rescues, as they sometimes take in mixed-breed dogs and find them homes.