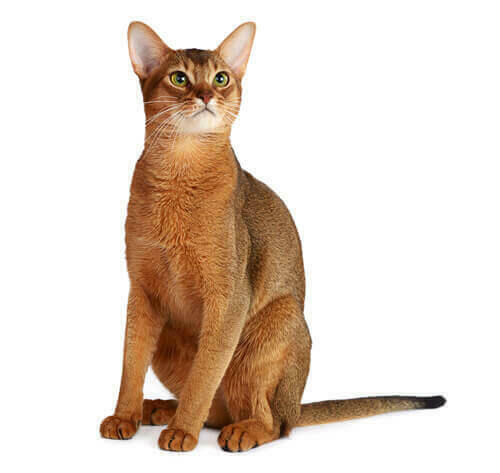 Inquisitive in nature, this breed loves to explore. They are curious extroverts who are fun and playful and are always active. They are also extremely intelligent. They are loyal to their owners and always want to be part of the action. part of the action. Abyssinians enjoy company but do not like to be in larger groups. larger groups. They get along well with children and other cats. This breed is very talkative, has a quiet voice, but always wants to be heard.

Although the Abyssinian is one of the oldest known breeds, there is still speculation and controversy about its history. In appearance, Abyssinians resemble paintings and sculptures of ancient Egyptian cats, which depict an elegant feline with a muscular body, beautifully arched neck, large ears and almond-shaped eyes. Today, abis still retain the jungle-like appearance of the felis lybica, the African wildcat ancestor of all domestic cats.
The origin of the name is not because Ethiopia, formerly Abyssinia, is thought to be the original home of these cats, but because the first “Abyssinians” exhibited in shows in England were imported from that country. The first mention appears in Harper’s Weekly (issue of 27 January 1872), where the third prize in the Crystal Palace exhibition of December 1871 went to the Abyssinian cat “captured in the late Abyssinian war”. This article is accompanied by an illustration of the Abyssinian Cat. In Gordon Stables’ British book, Cats, Their Points, and Characteristics… published in 1874, an Abyssinian cat is also mentioned. The book shows a colour lithograph of a cat with a dyed coat and absence of tabby markings on the face, paws and neck. The description reads: “Zula, owned by Mrs. Captain Barrett-Lennard. This cat was brought from Abyssinia at the end of the war…”. British troops left Abyssinia in May 1868, so it is possible that this was the time when cats with dyed fur first entered England. Unfortunately, there are no written records tracing the first Abyssinians back to these imported cats, and many British breeders are of the opinion that the breed was actually created by crossing the various existing silver and brown tabbies with native British ticked-coated “Bunny” cats.
Recent studies by geneticists show that the most convincing origin of the Abyssinian breed is the Indian Ocean coast and parts of Southeast Asia. In fact, the first identifiable Aby is a taxidermic specimen that still resides in the Leiden Zoological Museum in the Netherlands. This russet-coloured cat was purchased around 1834-1836 from a purveyor of small wild cat exhibits and labelled by the museum’s founder as “Patrie, domestica India”. Although the Abyssinian as a breed was perfected in England, its introduction to that country and others may have been the result of settlers and traders calling at Calcutta, the main port on the Indian Ocean.
The first Abyssinians imported to North America from England arrived in the early 20th century, but it was not until the late 1930s that a number of high quality Abyssinians were exported from Britain that formed the basis of today’s American breeding programmes.
As described in Carolyn Osier’s Abyssinian Breeders International Kitten Buyer’s Guide, “Abyssinians must be one of the most intelligent animals ever created”. This handbook for the prospective Aby owner describes Abyssinians as “a very people-oriented cat. Not a lap cat… but a cat that likes to be with people, a cat that wants to know what you are doing – that wants to help. There is probably no breed more loyal than the Aby. Once you have acquired an Aby as a companion, you can never complain that nobody understands you. Abys are very good at training people to do just what they want them to do”.
The price of Abys usually depends on the type, applicable markings and bloodlines distinguished by Grand Champion (GC), National or Regional Winning Parentage (NW or RW), or Distinguished Merit Parentage (DM). The DM title is achieved if the dam has had five Grand Champion/Premier (alter) or CFA DM offspring, or if the sire has had fifteen Grand Champion/Premier or CFA DM offspring. Generally, breeders make kittens available between twelve and sixteen weeks of age. At twelve weeks of age, the kittens have received the basic inoculations and have developed the physical and social stability necessary for a new environment, for exhibition or for air transport. Keeping such a rare treasure indoors, neutering or spaying, and providing acceptable surfaces (e.g., scratching posts) for natural scratching behaviour (the CFA frowns on declawing or tendonectomy surgery) are essential elements in maintaining a healthy, long and happy life.

Study: This breed of dog causes the most havoc